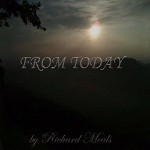 
Living in and around cities like Nashville, Tennesse and Austin, Texas for a large portion of your life is sure to bring out the musician in you. That's what happened to Richard Meals, who got into songwriting on top of his industrial career. Even after a move to Asia, he kept writing and performing his original songs. His most recent work is a single called "From Today." Recognized by the Great American Song Contest, "From Today" is an interesting number, with multiple genres melded into one. Its roots are firmly lodged in country gospel, but it also branches out with some Caribbean influence in the beat, synth, and guitar. About two-thirds of the way in, the tone shifts into some mild rock, with noticeably heavier drums and sharper electric guitars. It's an odd change in style that only lasts for a few fleeting seconds. Lyrically, "From Today" plays several parts: Meals praises God for what He did on the cross and how He saves our souls with His blood, and he also declares, "From today, I will follow You, from today, this love I will choose." It's basically the essentials of the Gospel put into one song. From a critical standpoint, there are some areas of improvement that stand out. The track is very quiet, almost sounding like a song you'd be listening to in the middle of a department store. Additionally, though experimentation with genre is generally a good idea, the switch to rock music in this song doesn't work so well; however, the blending together of tropical percussion and country gospel is great. I'd also like to hear Meals singing a little louder as well. His vocals are unique, and his Barry Gibb-esque vibrato is impressive. He sounds a little timid in this track, and I wouldn't mind the vocals being turned up a bit. With little to no online presence, it's hard to know exactly what to expect in terms of new music from Richard Meals, but if he keeps writing, I'd be interested in hearing more.
- Review date: 7/26/17, written by Scott Fryberger of Jesusfreakhideout.com