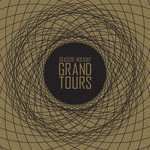 From the musical hotbed of Ohio, Cara and Morgan McQuate have launched an electronic duo known as Seaside Holiday. Debuting in 2012 with a full-length album, the duo dabbled in Christmas music the following year, and are now back at it with their latest batch of tunes, collectively titled Grand Tours. The McQuates cite influences that the average listener probably isn't aware of (Stereolab, Wild Nothing, Beach House), but one may also hear some NYVES, The Echoing Green, or Joy Electric influence. When it comes to two-member electronic outfits, you typically find that one member takes the music and the other tackles the lyrics/vocals (with some input, of course, from the other person). Seaside Holiday actually features Cara McQuate more heavily, as she not only wrote the lyrics and provides all of the vocals, but she had a big hand in the music as well. This is perhaps one reason that the album feels very cohesive and that the vocal and musical melodies fit really well together. The Depeche Mode-inspired "Etchings of Yesterday" is a great example; as Cara sings in the verses, quiet and haunting electronic guitars come in ever so slightly to complement her melody. The music is terrific; in fact; it's some of the best electronic music I've heard in a long time. "The End of All Things" is very percussion-heavy, with loads of hi-hat and persistent drumming on the snare and toms; "Blue Mass Patch" is similar, but also features some shoegaze and alternative influence, while the steady synthy rhythm of "Wreckage Required" would fit the playlist of an 80s club DJ. Unfortunately, Grand Tours does suffer in the vocals; Cara tends to sing in perhaps a lower register than what her voice is built for. The lyrics are also overly-cryptic and slightly awkward: not only does she emphasize words differently to squeeze them into a melody in which they don't belong, but at times, they also seem like they were poorly translated from another language. "Biding time as the years fly by, but we're doing just fine, don't go and preach of what could be beyond this debris" ("Wartime Recollections"), "The ceaseless day folds into night, walking shadows in line of sight, eminence to crestfallen, abreaction in wrapped box" ("A Vacation in Exile"), "Depraved soul's darkest of night, strongest grip to shield the blind, reassignment of scars in the battered beauty, hope far exceeds a lifelong malady" ("Wreckage Required"), and plenty of other examples are present here. It causes a bit of a dilemma, as the album is very enjoyable from a musical standpoint, but the lyrics and vocals drag it down quite a bit. Since the music is their strongest suit, I'd love an instrumental version of Grand Tours. - Review date: 7/12/16, written by Scott Fryberger of Jesusfreakhideout.com