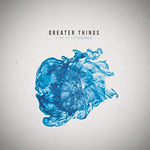 Life Church Music is the worship band from Life Church in Germantown, Wisconsin (main campus). Their album, Greater Things, was recorded live at a worship event held on March 2, 2016. The Greater Things event provided a full-length live album recording chock full of songs that are ready to be inserted into your church's worship service. While the instrumentation is much more indepth than most churches have the ability for, the songs can still be pulled off even with more minimal worship bands. The title track opens the album on an upbeat note before going into the more worshipful "More of You" and "Mountains." Some electronic elements and synths are brought into "No Matter What" (as well as with the bonus tracks, "Soul Searching" and "Surrender's Banner"). The sound definitely adds a different element and makes them stand out from the remaining tracks. The listener's fondness for electronic elements will very likely determine their like, or dislike, of these particular songs. The rest of the album is musically made up of Christian radio and congregational worship styled songs. The tunes undoubtedly fit the mold of today's modern worship and carry the sound that so many expect from today's worship music. Beyond the aforementioned numbers, the short and sweet (pun intended) "Tis So Sweet," "Child of Light" and "Thank You For the Cross," are also solid additions. While Greater Things comes far from breaking any molds, and does offer much more of the same ol'-same ol' musically, Life Church Music does it well. The music and vocals are both performed with excellent ability and the energy of a live performance is felt strongly. Fans of modern worship music and today's CCM will very likely find a lot to enjoy with the album. Fans of fringe worship artists creating a slightly different kind of art will probably want to keep scouring the indie scene for their next listen. - Review date: 8/31/16, written by Michael Weaver of Jesusfreakhideout.com

Live albums for rock bands are a bit of an exception to the rule, as many bands don't even end up recording one before eventually disbanding. In the realm of worship music, live albums and studio albums are accepted as equals. So for Life Church Music to come out of nowhere with a live recording of their Greater Things conference (for an album of the same name) is no suprise. Also not surprising is the content of said album. There's a formula that live worship bands tend to use, which has been adopted and put into full effect by Life Church Music. An energetic opening song leads into a lot of long, drawn-out epics that repeat the bridge and hook multiple times. The band also utilizes lots of synthesizers, chanting and vocalizing, and plenty of references to storms, waves, and mountains as metaphors for trials that we go through. There are some praiseworthy moments here, though, such as the inclusion of the hymn "'Tis So Sweet." I also found the music in "Unstoppable" to be very enjoyable and, at times, very pretty. It's also never a bad thing to be reminded of Jesus' grace and His constant presence in our lives. So while the album as a whole is a bit lackluster, artistically speaking, those struggling to reach out to Jesus in the midst of tribulations will definitely benefit from listening to the message of Greater Things. - Review date: 9/6/16, written by Scott Fryberger of Jesusfreakhideout.com