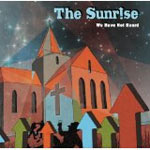 The Sunrise
Have We Not Heard

From the colorful cover art to the throwback sounds contained inside, there is no mistaking that Cleveland, Ohio's The Sunrise is quite the nostalgia trip for the 1970's Jesus Music Movement, and that's exactly how James and Rebecca Mileti want it to be. Hearkening back to the earliest days of CCM as we know it -- The Resurrection Band, Larry Norman, and Christian hippies -- The Sunrise's sophomore release We Have Not Heard makes for a charming throwback in its best moments. Retro sounds are mainstream in a big way, but rather than make a 70's influenced indie album, everything about The Sunrise is styled to mirror the classic chilled out hippie folk sound, and that's not necessarily a bad thing. Some assistance from guitar legend Phil Keaggy and Crosby Stills Nash and Young drummer Joe Vitale add a nice touch as well as some classic rock cred to this record. And despite some less than stellar recording and production values, James' and Rebecca's vocals are true to the spirit of the era, blending nicely with the nostalgic sound.

Depending how you look at it, the songwriting itself is either the biggest detriment to the record or another crucial element of this Jesus Music tribute. The forthright evangelical songwriting all too often relies on Christian cliches and sounds a lot like it exists to make a point, rather than simply be part of the song's craft. While such unironic faith-sharing is somewhat refreshing against more "watered down" lyricism, some extra attention to nuance and craft could benefit these songs and lift them out of the realm of novelty. Still, as far as the genre goes, The Sunrise might be just the right thing for listeners yearning for some 70s nostalgia. - Review date: 9/10/13, written by Jen Rose of Jesusfreakhideout.com