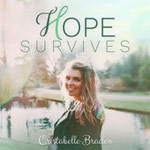 Music is quite possibly the most powerful way of communicating the rhythms of life: the pain, the joy, the despair, the hope, etc. Indie artist Cristabelle Braden clearly knows this and is taking her opportunity to share the pain she has experienced and the hope given to her in Jesus with her latest release, Hope Survives. Beginning the album is the welcoming and encouraging "We're Gonna Make It," as Cristabelle calls listeners to press on and to see the beauty found in the scars of life. That positivity beautifully sets the tone of the album, encouraging listeners to see the struggles of life used for God's glory and our good. Echoing that sentiment is "Let the Sun In," with a lighter tone and more upbeat tempo; while some of the song feels slightly sonically unbalanced, it sounds like it could be easily heard on the radio. Introducing a melancholier sound is the title track. Braden addresses that pain is real, but even a tiny bit of hope is what helps people to persevere. What gives the song some serious weight is to know Braden's testimony as a survivor of brain injury -- and undoubtedly not just a survivor, but someone who is thriving in the life that she has been given. "More to Me" and "One of Those Days" are both introspective tracks that look at Cristabelle's soul as she acknowledges her faults but recognizes that she is still a work in progress and cannot be defined by her circumstances. "Fight for Me" shows a more transparent side to the artist as it reveals those heartfelt but painful prayers to the Lord. While she pleads to know where God is in her circumstances, she reminds herself of His ever-present love and His purpose for her life. Concluding the album in a way similar to how it began, Braden encourages her listeners with "It's Not Over." She reminds us to not give up but to press on through the struggles of life. Her words are extremely uplifting as she sings, "There's more to this story, it's not over today. No matter your journey, God's making a way. It's not over." Overall, this is a strong effort from someone who has incredible potential in the CCM scene. Cristabelle's vocals are strong without being overwhelming, her melodies are extremely catchy and the music is comparable to many contemporary artists. The only hiccups are some of the production decisions that seem to be a little heavyhanded and end up becoming distractions: overly loud background vocals, occasional lead vocals being drowned out by the instruments, and an overabundance of vocal accents. Nevertheless, Hope Survives is a clear example of an indie artist that shows true promise. Well done, Cristabelle! Thank you for sharing your story with us. We will, no doubt, be seeing and hearing your name again. - Review date: 4/2/17, written by Ryan Barbee of Jesusfreakhideout.com 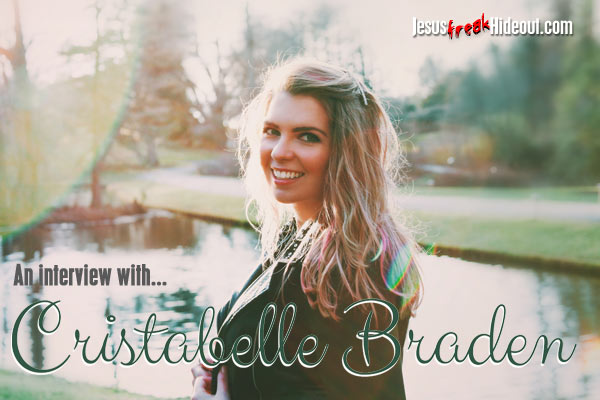 Cristabelle Braden: I had a very serious traumatic brain injury, as a result of a running game accident at my youth group. When it first happened, I didn't show any signs of immediate concussion or anything... but the pressure was building up in my brain. As my brain swelled, my symptoms surfaced, and by 3 days afterwards, it was clear that I had a serious brain injury. I couldn't walk straight, couldn't hold coherent conversations, had blurry vision, and basically had to relearn everything from the ground up - including simple tasks like taking a shower and getting dressed. I went through years of rehab therapy and doctors predicted I might never graduate high school. In the early stages of recovery, I began to write music. I had never written a song before the brain injury, but I started writing hundreds of songs! I had a hard time holding conversations due to effects from the injury, so music became my form of expression. At the time, I never would have guessed what the Lord would do... not only did I go on to graduate high school, but also recently graduated college, and am now a nationally touring singer/songwriter. It's truly by the grace of God that I'm even here today!

Cristabelle: It is definitely meant to be encouraging! I want every listener to know that it's okay to cry and it's okay to feel. It's okay to hurt. But no matter how dark your circumstances are, no matter how difficult the days are, no matter how tired you are... there is ALWAYS hope! Lyrics from the last song on the album, called "It's Not Over," say "There's more to this story, it's not over today / no matter your journey, God's making a way." That's exactly what I hope to accomplish. I just want every person who listens to know how much they are loved by God.

Cristabelle: Yes, I just got home from the Hope Survives Tour! It was my first full headlining tour and such an amazing experience. We played at brain injury support groups, rehab centers, hospitals, prison ministries, homeless shelters, and churches. As far as future plans go, I will go wherever the Lord leads! I'm so thankful for where this journey has taken me so far, and I plan to continue touring and sharing His word through music!

Cristabelle: Writing "Fight For Me" had the deepest impact on my life. A few years ago, I was going through a very dark season where I couldn't feel God or see Him... and I felt like every single thing that I was doing was wrong. For about 6 months, I hadn't sung or written any songs. I honestly thought I might never sing again. This is the first song I wrote coming out of that season. It's based on Exodus 14:14 which says, "The Lord will fight for you, you need only be still." The realization that God was fighting for me changed my entire perspective. I was reminded that His love for me is dependent on who He is, not on anything I did or didn't do... and that I didn't have to fight my way through the lies in my life, but that God already had victory. In short, the truth of the gospel hit me like a ton of bricks and suddenly I could breathe again. Sometimes, we just need to hear it a different way. I wrote that song, still in that dark place... but choosing to worship despite it. You can hear me grappling for truth in the lyrics. It was written without any ulterior motives of the song being heard or being on an album or anything, but simply to worship and to make the decision to trust. Writing that song was my first step out of that dark season.

Cristabelle: I would LOVE to tour with Casting Crowns on any continent! (Actually, I'd love to just meet them...!) They were the first Christian music I ever heard, and their record Lifesong played a huge role in my recovery process. I would listen to it over and over again going back and forth from my daily brain injury therapies!