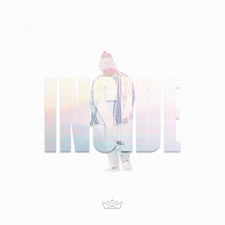 When your family tree includes members of Public Enemy, it's likely that hip hop runs through your veins. Jelani Malik and his new album Inside seem to be solid evidence of this. That being said, instead of the classic gangsta rap sounds of Public Enemy, Inside is a lot more modern, with a larger focus on smooth R&B vocals and beats than raps and boom bap. Malik proves to be a competent singer; he's not the strongest vocalist I've ever heard, but he's not bad by any means, and he knows how to use his vocals to complement the music. And the few times he does lean into rapping, it also works in the song's favor. "Circles" is a great example and probably the best sample platter for everything he brings to the table, with a low-key, yet catchy musical melody, chill hop-esque beats, and a strong blend of singing and rapping. It also dives a little into Malik's backstory, as he tried to figure out life on his own: "I was so caught up painting thoughts and dreams that don't mean much to me / but I had to face reality, that wasn't the plan You had for me  But You took my hand / slowed me down enough to see / the voids that need that filling start with G-O-D." All of it combines into a real highlight of the album that would be a perfect addition to your softer playlists. This song also sets up a nice run of songs from here into another highlight, "Lotus," which does feature heavily auto-tuned vocals and a mild trap beat, but sounds great within the album's context. Inside has a lot going for it, but there are a few areas of opportunity to be found, too. The songs could use some kind of flavor to help them stand out a bit more. That being said, the opposite critique can also be made, as a couple of tracks stand out too much. For instance, the "Boop Bap" skit near the beginning of the tracklist, though amusing, doesn't really seem to serve a purpose for the album, and feels very out of place on an otherwise serious album. Additionally, "Joy" is a hyped up industrial dance track, with extremely muffled vocals, that comes out of nowhere to close the album on a wildly different note than you'd expect. There's a delicate balance when it comes to giving music a personality of its own, but it's definitely attainable for someone as clearly talented as Jelani Malik. If you like modern R&B and hip hop, Inside is more than worth a listen.
- Review date: 11/11/22, written by Scott Fryberger of Jesusfreakhideout.com