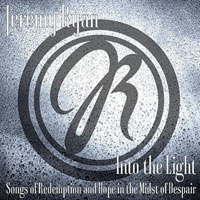 Jeremy Ryan
Into The Light: Songs of Redemption and Hope in the Midst of Despair EP


For Texas native Jeremy Ryan, playing music has been nearly a lifelong passion. Learning the craft in middle school led to fronting bands in high school, and now, as a believer in Jesus, he's using that same passion to worship his Savior and share the Gospel. His first outing as a solo artist is a short, five-song EP with a long title, Into the Light: Songs of Redemption and Hope in the Midst of Despair. Ryan's style has always been influenced by rock and metal, and you really hear those influences play out in these songs. A lot of this EP fits in well with bands like 12 Stones and [early-to-mid 2000s] Kutless and Seventh Day Slumber, and Ryan's vocals have that same deeper tone associated with the genre (except he seems to enunciate a little better). Ryan's music does feature enough diversity to keep it interesting, though. A perfect example would be "Beautiful Thing," which is a very radio-friendly pop rock song at its core, complete with some poppy synth, but also features some chugging guitars and a nice guitar solo in the bridge. "Resurrecting" also takes a bit of a turn from the norm with some almost-80s synth melody that vaguely reminds me of Skillet (if only for a moment). My favorite track is a rocker entitled "No Other Way." Its smooth groove and a punk rock-esque guitar/drum combo hits a sweet spot in my ears. As for the lyrics, Ryan tends to keep it simple, as he sings of the importance of God's salvation -- and not just salvation from Hell, but salvation from the entrapments of life on Earth as well, as we see in the opening track, "Out of the Darkness." "No Other Way" also makes mention that Ryan has decided that there is literally no other way to live than with Jesus, who keeps him safe from, and forgives, his sin. Into the Light is a solid introduction to Jeremy Ryan, and I'd be interested in hearing where he goes from here. If you crave music from the types of bands listed above, then Jeremy Ryan may be a great addition to your music collection.
- Review date: 8/2/18, written by Scott Fryberger of Jesusfreakhideout.com