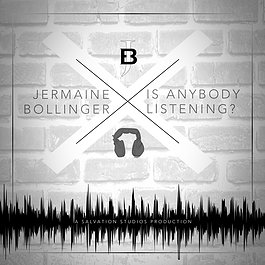 Jermaine Bollinger
Is Anybody Listening?

Releasing two full-length albums and one EP in 2016, Jermaine Bollinger is already set to release another full batch of songs just ten months after the last one. His newest album is called Is Anybody Listening?, and it picks up right where The Great Unknown left off. With so little time in between releases, it's only natural that the two albums would sound pretty similar, unless the intent was to make two completely different albums. Such is not the case here, and in all honesty, Is Anybody Listening? may have turned into a better listening experience if Bollinger and his band had experimented with some new sounds. As it is, with their music already sounding like a lot of other bands in their genre, four similar-sounding releases in less than two years is a bit overwhelming. Now, to be fair, not every song on this album falls into the same power pop worship format. For instance, "You're Everything" is almost a pop/country song, sounding like something Rascal Flatts might write, and "Idols" actually features rapped verses. Bollinger raps the first verse, and for the second verse, he's joined by a rapper who goes by the name Point5. It's an interesting track, for sure, and on paper, it might sound like a bad idea, but it actually works well. Later in the album, the ballad "Saved Alone" features some dance-like synth sounds and some subtle electronic beats that don't entirely feel out of place in the song. Most of Is Anybody Listening? feels a bit too standard to be an outstanding album, though. His fans will no doubt be pleased, and this would even be a good place to start for any potential new listeners interested in seeing what Jermaine Bollinger is all about. - Review date: 6/2/17, written by Scott Fryberger of Jesusfreakhideout.com