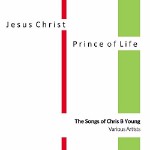 
There are lot of people who have a passion for creating music, but seem to lack the talent to actually play any instruments or sing. Chris B. Young has no problem admitting to having this issue, but he doesn't let that stop him. On his debut album, Jesus Christ: Prince of Life, listeners encounter a full-length album, the lyrics of which were entirely written by Young himself. But that's all that you'll hear from him, as all the instruments and vocals are courtesy of other musicians and singers. The vocalists are anonymous for contractual reasons (according to Young's website), but none of them seem recongizable, so don't expect any big names. The vocals are the album's strongest aspect, however, taking Young's lyrics and singing as if the songs were truly their own. Even when the lyrics aren't very strong, they're sung with enough passion and care to mostly overshadow the weaker points. The music fits very comfortably into the contemporary genre, but generally plays it safe. When it comes to Young's lyrics, it's clear that he's not an experienced lyricist, but rather, a man who loves Jesus and writes simply to glorify Him. The song titles can be a little awkward, acting more as phrases than effective titles (such as "Holy Spirit Speak To Us We Pray" and "Father God You Are My Hope My Life"), but it's not the case for every song. Though Young's writings aren't particularly strong, each song is worshipful, giving full glory to God from beginning to end. Jesus Christ: Prince of Life is an album with a lot of potential to encourage its listeners while providing some new songs for those wanting to worship the Lord through song.
- Review date: 7/26/17, written by Scott Fryberger of Jesusfreakhideout.com

The gift of the songwriter is sometimes overlooked or even dismissed in place of the admiration of artists and bands. Believe it or not, some of the greatest songs performed by popular artists weren't and aren't written by the performers but by talented lyricists and composers. Chris B. Young is a great example of a gifted songwriter who has surrounded himself with equally gifted musicians on his latest project, Jesus Christ: Prince of Life. The album is a collection of personal songs written by Young. However, these tracks range from excellent to somewhat forgettable. Songs like "What Sweet Mystery" and "At Calvary" by far are the shining jewels of the album, as they have outstanding instrumentation and captivating vocals. In contrast, "O Lord We Now Come" and "Father God You Are My Hope My Life" do more harm than good as they sound slightly hokey and don't have gripping melodies in comparison to the rest of the album. Young's lyrics and melodies display his proficient skill and could conceivably be recorded by many talented recording artists -- as a matter of fact, they are. The vocalists and instrumentalists featured on this collection are quite fantastic, but listeners are left not being able to appreciate them as this is not a band or even a collective; they are simply treated as studio musicians. Overall, the album is a strong yet dichotomous effort, as the strength of each song varies greatly. In addition, listeners may have difficulty connecting to Mr. Young because he isn't a part of the performance. With that in mind, this album may not leave such a lasting impression. Nevertheless, this album is definitely worth a listen or two and should serve as an encouragement to songwriters everywhere. - Review date: 7/27/17, written by Ryan Barbee of Jesusfreakhideout.com

**Note: All of Chris B. Young's songs (and sheet music) can be downloaded for free from his website: chrisbyoungsongs.com.