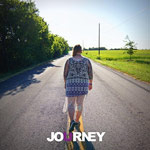 Michael Lacoste, aka DAMAC (Deeply Anointed Music About Christ) a Christian rapper from St. Louis. DAMAC has been touring for about 6 years and approaches his craft with the sole purpose of creating music to glorify Christ. Journey mostly falls in line with what you'd expect from a lot of modern hip-hop and rap (though "Stay" is much smoother), but Lacoste himself has a more gruff sounding voice. "Unite" kicks the album off with a nice sounding guitar lick that continues throughout the entire song. The track has a really nice vibe and starts things on a positive note. "Boss" follows with a more standard hip-hop sound, but features a pretty solid sounding electric guitar solo near the end. "Project 86" is up next and, if you're wondering, is not a song about the hard rock band fronted by Andrew Schwab. The track has more of a club/dance feeling and features a keyboard section that sounds like it was borrowed from a Nintendo game. Sadly, the track just doesn't really fit in with the rest of the album. After two solid openers and two weaker cuts, DAMAC gets deep with "BIA" (Black in America). The song focuses heavily on police, and others (like Treyvon Martin), and shootings that have occurred over the past couple of years. The first 3:08 is the actual song, but the final 2:43 is a monologue. While DAMAC raises some valid points -- especially in the monologue -- he also points some heavy fingers and paints with broad strokes in his raps. It's a sensitive subject matter that will speak to different listeners in different ways. "Stay" follows and is hands down the best track on Journey. The piano, bass guitar, horns (closer to the end) and overall R&B feel make it a super smooth and enjoyable listen. Lyrically, it's also pretty deep as it talks about his dad leaving. While "Stay" is the official closer, there is also a bonus track -- "@Followme." The bonus sounds a little self-serving at first listen, but actually gets in to how people talk and portray themselves, and their faith, on social media. DAMAC asks, "When they see you, do they see Him?" It's a good question to consider in today's social media driven and self-obsessed culture. Journey is a decent introduction to DAMAC if you're not already familiar with the St. Louis rapper. Hip-Hop fans may find something to enjoy here, but "Stay" is highly recommended even if you decide to pass over the album as a whole. - Review date: 11/16/16, written by Michael Weaver of Jesusfreakhideout.com