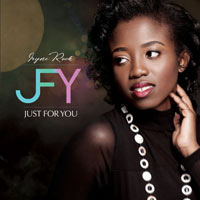 Iryne Rock
J.F.Y (Just for You)


Iryne Rock is a Nigerian singer/songwriter who grew up listening to some of the great Spirit-filled musical artists from the past few decades, like The 2nd Chapter of Acts, the Winans, and Michael W. Smith. With this appreciation for music from an early age, Rock started trying her hand at songwriting and discovered a talent that she wanted to use to glorify our Savior. And that's exactly what she does on her newest release, J.F.Y (Just for You). Rock's style is obviously derived from the aforementioned influences, with gospel and contemporary cores mixing with pop, r&b, and a little bit of reggae. That being said, much of the album's music is softer and more down-tempo than that description may lead one to believe. The first half of the album does contain some upbeat songs that would work well on Christian pop radio, like "To Be Different" and "Meet Us Here," but they're the exception rather than the rule. Rock's vocals, however, are often on the opposite side of the spectrum, singing loudly and strong. Occasionally, her voice overpowers the music, but it's nothing that a little sound editing wouldn't be able to remedy. Lyrically, Rock displays a complete devotion to Jesus, with songs like "Anything" and "Just For You" describing her dedication to His plan and willingness to trade all for what God offers us. "One God (John 1)" quotes the verses from John 1 that talk about Jesus' Lordship, while the chorus proclaims that we serve one God and His name is Jesus. A few tracks later, "All Is Alright" acknowledges that God is sovereign over our lives, and that He walks with us, in front of us, behind us, and is the center of our lives. There's no question about Rock's love for Jesus in these songs. Just For You is available now; fans of Christian pop and r&b music might find a lot to like in Iryne Rock.
- Review date: 7/17/18, written by Scott Fryberger of Jesusfreakhideout.com