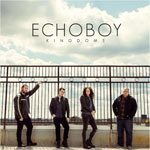 Echoboy is a full-fledged, fivepiece pop rock band from Louisville, Kentucky. Born out of a perseverance through various pains and struggles, Echoboy's first foray into an actual music release comes in the form of a three-song EP (or single, according to iTunes) called Kingdoms. Kingdoms is an optimistic release, featuring a sound more polished than a great many independent bands. Bands like The Digital Age and An Epic, No Less come to mind, as Echoboy mixes a pop rock sound with some electronic elements. Lyrically, the band is full of hope in Jesus Christ, despite the darkness of the world we live in. This is perfectly summed up in the first song on the EP, "Miracles." Going into the chorus, we hear "In a place that's further from the truth, that's separating me from You, I don't wanna go to where I've been," followed by the hook itself, "I wanna see all the world today covered in miracles, I can see You shining, like the morning, like the brilliant sun (covered, I'm covered up, covered in miracles)." These fit perfectly with the following two tracks: "Kingdoms," which touches on the parable of the man who built his house on the sand, and "Echoes," which praises God for bringing our hearts to salvation. Echoboy's Kingdoms EP is an ambitious release that I'm sure will not fall through the cracks easily. With their specific sound and Christian market appeal, I'm sure we won't be hearing the last of Echoboy anytime soon. - Review date: 11/12/16, written by Scott Fryberger of Jesusfreakhideout.com

Echoboy gives everyone a strong glimpse of what they are capable of with the Kingdoms EP. While only a brisk three songs, it isnt hard to see the appeal of the band, both inside and outside the CCM scene. While Miracles doesnt offer much more than a typical, driving contemporary pop sound, lyrics, and structure, both of the other offerings (the anthemic Echoes and the moody Kingdoms) offer more musical and lyrical depth that raise this reviewers eyebrows with interest. The balance of the three songs speaks well for their future appeal; songs like Miracles are necessary to make Echoboy immediately viable within the industry, songs like Kingdoms capture the interest of more underground/indie Christian audiences, and songs like Echoes contain the best of both worlds. The key to make them more than just another CCM band will be to keep this balance without swaying too far in the CCM-friendly or indie-friendly directions. With impressive production that makes them sound as good as, if not even better than, most signed bands, Echoboy has a lot going for them, and I would not be disappointed to hear more from them in the near future. - Review date: 11/21/16, written by Mark Rice of Jesusfreakhideout.com 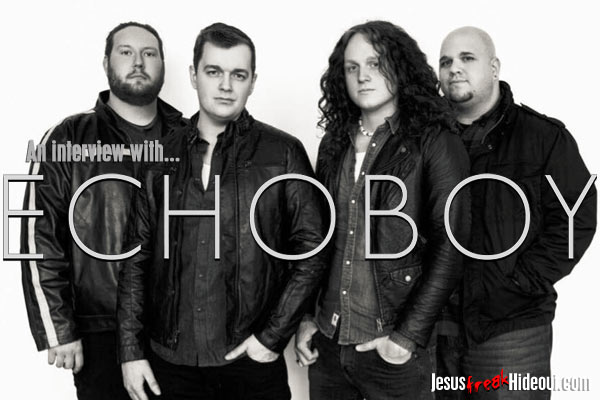 Jonathan Jackson: Well, I guess we liked the feel of it and everything else we came up with was bad. We really love the name, though.

Jonathan: My brother Joel [Jackson] and I have been writing and recording music in various bands over the years separately. Joel had a band called Second Perception that was running and releasing music for about five years, and I had a band called The Beautiful Discord. We had a decent run, released an EP, and did a little bit of touring. I think we both learned a lot about songwriting, performing, and running a band with the various projects that we were a part of. We reconnected about a year ago, started writing, and realized that this was something we wanted to do together and formed the band Echoboy this past spring with some of our friends.

Jonathan: The response to Kingdoms has been great. I think when you pour yourself into crafting good songs and spend the time that it takes to get them where they "feel" really good, whether it's the lyrics, a melody, arrangement, etc., the end result is that the listener is able to connect with the message and the music in a way that it stays with them. We released "Kingdoms" and "Miracles" as music videos before we dropped the EP and they received over 40,000 views collectively and were shared about 500 times over social media. The response was really encouraging and definitely motivated us to keep going.

Jonathan: "Echoes" came from a place where I was having to constantly remind myself that God hadn't left me, that even though I didn't always feel His presence, He was still there. The chorus is basically me acknowledging who God is and what He's done ("You shine the light and hold the stars in the sky, echoes of Your love"), but at the same time feeling that my heart was overcome in the midst of it all. God was there all along, but I felt like I lost my heart in wreckage. There's hope at the end of the song ("You pulled me out, You pulled me out"), ultimately ending with a turn of the lyrics to, "You pulled my heart from the wreckage," because I believe that there is always hope. No matter how dark our world may seem, no matter how broken we feel, we have hope in the Gospel and ultimately that injustice and brokenness will come to an end.

Jonathan: We listen to all types of music - pop, rock, country - and grew up on everything from Switchfoot to David Crowder*Band to Underoath. But as far as our sound on Kingdoms, I'd say Imagine Dragons, a little bit of the 80s, and some mid-2000s pop rock mixed with the Stranger Things soundtrack.

Jonathan: We currently have two songs finished, as well as two more that we're working on in the studio with our producer, Michael Sanders, are really excited about them. We're hoping to finish them by the end of December and get started on another two songs for January. So, to answer your question on a full-length...maybe? Hopefully? We'll see? We've found, as an independent band, that releasing three-to-five-song EPs is a great way to get the most out of each song and lets us release three to five of our absolute best. We also like to release most of our songs as fully-produced music videos leading us to releases, so I'm not sure if we could tackle nine videos. But who knows? We're ambitious, so it might happen. We're really starting to hone in on our sound, and I think people will be really surprised - in a good way, we hope - with the new songs.

Jonathan: We want people to ultimately find hope in our music. As crazy of a year as it seems like 2016 has been, we wanted people to hear a song like "Miracles" and feel like there was still something out there for humanity to be hopeful about. We want to be honest in our lyrics and encourage people to look for the good in life, no matter how dark or crazy things seem.

Jonathan: We had some amazing people work on Kingdoms. Our producer, Michael Sanders, who works for Seth Mosley at Full Circle Music in Nashville is absolutely killer. We also had Jeff Julliano (John Mayer, Matchbox 20) mixing on "Kingdoms," and Craig Alvin (Gungor, Amy Grant, Bethel Music) mixing on "Echoes" (where we had the privilege of recording at Dark Horse Studios in Franklin, Tennessee). Sean Moffitt (Newsboys, Rend Collective, Phil Wickham) mixed "Miracles" for us, and we had mastering by Dan Shike on "Kingdoms" and "Miracles," with Shelly Anderson on "Echoes." We're really excited about 2017 and can't wait to share more about the new album/EP. We've got some amazing collaborations in the works that we're stoked about.