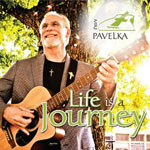 Mike Pavelka
Life Is a Journey

Robstown, Texas native Mike Pavelka is making waves in his surrounding area with his music, having recently released an EP called Guided By The Holy Spirit. It created a lot of anticipation for more, which he satisfied back in February with his first full-length solo album called Life Is A Journey. Pavelka's Texas roots really show in his music, as it leans very heavily toward country music (except that Pavelka doesn't really have a twang in his voice - though some of the songs have a twang in the guitar, such as the love song "My Very Angel"). Life Is A Journey is composed of mostly original songs, with a couple praise and worship covers thrown in (Matt Redman's "Heart of Worship" and the old hymn "Holy, Holy, Holy," originally written by Reginald Heber). "Heart of Worship" is a song I've always enjoyed, but Pavelka's vocals seem rather dry as he sings it, while his version of the hymn is the better of the two, albeit imagined much, much slower. His original songs are clearly the better ones, although a couple of them seem like carbon copies in some respects (for example, "The One Who Cares" and "My Daily Prayer"). While Life Is A Journey does have the aforementioned love song dedicated to Pavelka's wife, the majority of it is meant for worship and for encouragement to his fellow believers. There are moments where the album seems to drag on, with several dull parts here and there, but this has less to do with album quality and more to do with the album being designed for a particular listener demographic. It's produced well with solid instrumentation, and it demonstrates both Pavelka's talent and his heart for God, but it won't really appeal to anyone outside of fans of adult contemporary or Christian country music. If that sounds like something you'd be interested in, then Life Is A Journey is worth checking out. - Review date: 6/7/12, written by Scott Fryberger of Jesusfreakhideout.com