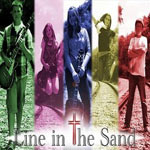 If you're in your mid-teens and you can say that your band has opened for Building 429, Jeremy Camp, Tenth Avenue North, and BarlowGirl, then your band already has an impressive resume in the Christian music world. And the Indiana-based, power pop/rock band Line in the Sand is able to say that, at the ages of 15 and 16 years old. Their discography consists of a self-titled EP they put out in 2012, featuring three songs written and performed by these five teens. The three songs are super positive, and are focused on encouraging their discouraged fellow believers, telling them to "shine so bright that even the stars in the heavens have to close their eyes" in "Shine." Though the line "You're perfect just the way that you are" isn't theologically sound, I understand and appreciate the intent. Line in the Sand gives thanks to God for what He's done in our lives in "Thank You Thank You" ("You are my Rock, you are my salvation, You are the reason for every creation, I hope You hear me when I say how I feel, I want to thank You thank You, for how much You love me love me, and I want to give You give You all that I am"), and expresses a little bit of humility in "Where I Stand," singing "I lived my life for me, no one else to please, but it was never enough, never enough for me, can someone set me free?" It's always nice to see honesty in lyricism, even if it can be tough to talk about. Line in the Sand doesn't express these things with strong lyricism, but that's an art and skill that can be developed over time, which is something of which they have plenty. The same can be said for their musicianship and production. The music of Line in the Sand isn't incredible, but it's far from terrible, which is a lot more than one can say about a host of independent musicians today. Stylistically, Line in the Sand is about the equivalent of what Jump5 might have sounded like had they gotten their start in 2012; the vocals and melodies are pop-influenced, and the music seems to have stemmed from the pop rock musings of artists like Capital Lights, Hillsong United, and Kelly Clarkson. In addition, despite their social media biography not implying so, the band members may or may not have some interest in heavier music, as "Thank You Thank You" features a pretty rad guitar solo, and "Shine" has a quasi-breakdown near the end that even includes some gang vocals. The latter doesn't fit in as well as I would like, but it's great to hear some experimentation. It's simply-structured (not straying too far from the verse-chorus-verse-chorus-bridge-chorus formula, though there is some deviation), and the production almost bears witness to a live recording format, though it's easy to tell it's not. With some strong focus on all the elements of being a band (songwriting, lyricism, musicianship, production) and a load of dedication and patience, Line in the Sand could end up being a household name in Christian music. Check out their EP and see if you agree. - Review date: 4/19/13, written by Scott Fryberger of Jesusfreakhideout.com