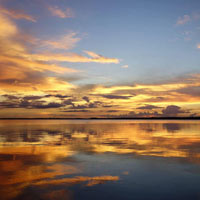 
The digital age of music has its notable pros and cons, but one advantage of its existence is that it's easier than ever for aspiring musicians to get their music into the proverbial hands of potential fans. Having felt inspired to try his hand at it, and with the intent to bring glory to God and point people to Him, Andrew Bauschlicher put pen to paper and began to flesh out the songs that would bring Written to the Heavens to life. His first album is called Long Time Coming, a collection of songs that span various genres and feature several different vocalists. The vocalists wouldn't be considered traditionally great singers, but they do fit really well with the sounds they're paired up with. However, the track list doesn't flow well, mostly due to the varying genres. The first half of the album serves as a great example, as we hear dance music, pop rock, and country within the first few songs. Even if the songs were exceptionally good, the transition would still be more jarring than anything. The pacing of the album is also a bit of a hindrance; the opening track is a groovy dance track, but the album immediately slows down for some ballads. The listener never really knows what to expect next. Additionally, the lyricism shows that there is still a lot of room left for improvement; Bauschlicher's passion for Jesus is evident, which is great, but a lot of the lyrics point to this being his first outing as a songwriter, with average melodies and weak rhyme schemes. All this being said, Written to the Heavens is not a project without potential. Everyone starts somewhere, and Andrew Bauschlicher may one day be writing amazing songs that we'll all be singing.
- Review date: 9/7/18, written by Scott Fryberger of Jesusfreakhideout.com