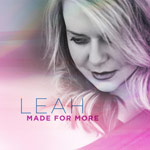 Leah
Made For More (Single)

Leah is a Christian pop singer from Oklahoma. Her second independent release, the Every Move EP, released in 2014, but her debut radio single, "Made For More," released on June 7th of this year. The song was inspired by the first chapter of The Prayer of Jabez for Women. The electronic flavored pop song came from the thought that, while being a mother is extremely important, she was created and made for more than just being a mom. Leah knows she was also called to raise up the next generation of Christ followers -- something she says starts with her children. Leah sings, "You were made to live, made to give, made to love, you were made for more," in the chorus of the song. Musically, the song feels like something you may expect from an artist like Plumb. While it doesn't have quite the power of a Plumb song, it does have its moving moments. Lyrically, the chorus surrounds what the song is about, but there is some better creativity in the lyrics featured in the verse. For those not familiar with Leah's previous efforts, "Made For More" should definitely pique the interest of CCM fans who lean more towards the pop side of the spectrum versus the standard worship side. Those who find a lot to like in this single will be excited to know that she is working on a Christmas EP for 2016 and a full-length project in 2017. Leah has released a solid pop number that could hang with anything on CCM radio today. - Review date: 6/7/16, written by Michael Weaver of Jesusfreakhideout.com