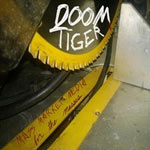 Indie metal artist Doom Tiger is back with another self-produced EP. His first, simply titled EP, was a death metal EP, but his newest is a foray into the arena of drone metal. Mass Market Media for the Masses delves into the long, and I mean LONG, and winding road of drone music. Drone music in general is very minimalistic and, honestly, a tad boring at times. The music is completely stripped down. There is one guitar track that is very repetitive throughout each song, songs feature extended guitar sustains, and the drums are all but removed. While it may sound a little boring and tedious to most, Doom Tiger is right on the mark for what's expected of the genre. Everything is purposely oversimplified and the tracks quite literally "drone" on and on. The first three tracks clock in at 13:33 exactly while the final song hits a mind blowing 27:06 (exactly twice the length of the others). The brightest spot, for me, was around the halfway point in "Death Perception." Doom Tiger has also stepped up production in between EPs. While his newest project still doesn't have that professional studio quality sound most would prefer, the tones are much better this time around. Drone metal is definitely not for everyone and it's not something you're likely to put on while driving down the road. It does, however, make for something decent to put on in the background. The tracks are instrumental only and are very, very simple. Though stylistically quite a departure from the first EP, congratulations to Doom Tiger for his fairly solid venture into drone metal. - Review date: 4/11/14, written by Michael Weaver of Jesusfreakhideout.com