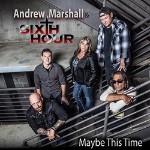 Country music is a staple of the southern and midwestern states; from Kansas to Tennesse to Texas, you can find the genre on a great deal of stations if you just scan the airwaves. But they don't have a monopoly on the sound, as you can find it in some of the more unexpected regions of the country. Take North California, for instance, which is the home of the fivepiece country and southern rock act, Andrew Marshall & Sixth Hour. The band members are all experienced in music to varying degrees; though Maybe This Time is the first outing under the Sixth Hour name, you can hear the experience pouring through each song. Marshall's vocals are akin to those of modern country artist Chris Stapleton, and Sixth Hour is responsible for some truly solid country music, from the balladry of "Redeemed" to the edgier sound of "Forgiveness (Sinner & Saint)." They also incorporate a lot of pop influence to potentially broaden their audience beyond the country music crowd. I could imagine more than just country fans enjoying "I'm Alive." You can also hear their love for Jesus in the six songs on the tracklist. "In Your Arms" tells a personal redemption story - most likely, Marshall is singing from personal experience, as his personal bio on the band's website talks a little about his past running from God and trying things his own way. I particularly like the lyrics in the chorus: "I lost myself and I found the great I AM, and You're reaching out Your hand, I know my sin's so deep, I'm bowing at Your feet, and I'm made whole again." Andrew Marshall & Sixth Hour is a talented band with music that would appeal to more than just what it might seem on the surface. Whether it's the melody, the vocals, the music, or the lyricism, Maybe This Time could appeal to fans of MercyMe, Third Day, or even Bon Jovi. Give them a listen and you might be surprised to find that you like it, too. - Review date: 3/8/18, written by Scott Fryberger of Jesusfreakhideout.com