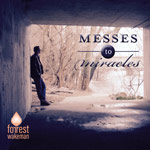 Forrest Wakeman is a talented worship leader and songwriter from Michigan. On top of leading worship, Forrest has a doctorate and master's degree, was on faculty at Cornerstone University, and is a professional pianist playing in numerous Broadway musicals. Wakeman's Messes to Miracles is an album that chronicles his personal voyage telling a story of loss and the grace of God. Wakeman invited in some nice guest vocalists and talented musicians to help him pull this album off. Messes to Miracles shines brightest from a musical composition standpoint. Musically, the album is better and much deeper than the countless other radio ready worship options. Wakeman's personal education and years as an educator are evident when listening to this album. "You are Good" is a great example of composition, and artists like Chris Tomlin could learn a thing are two from Forrest Wakeman in this aspect. Wakeman also does a praiseworthy job of making the album authentic from a lyrical standpoint. While listeners won't necessarily find anything extremely profound lyrically here, they also won't find loads of clichés and standard lines found frequently in other worship music. For example, Wakeman sings, "When my heart is tossed at sea in a storm I cannot fathom and I lose all I hold dear. When the waves have pulled me under and I cry out in despair, God, this is more than I can bear" in "You Are Good." However, the album's weakness shows more in the vocal performances throughout. Wakeman has a pitch-perfect voice, but the vocals often come out seeming more for a flawless and polished sound over a genuine feeling of passion -- this is an area an artist like Tomlin usually excels in. That's certainly not to discount the intentions of this project, or the worship leader himself, but more of an observation of the actual recording. This is most evident during the pseudo-rap section found in "Be Still."

Overall, Forrest Wakeman has put together a very nice worship project with Messes to Miracles. "Alive in Us," "Psalms 113," and "You Are Good" are the shining examples of Wakeman's best. The guitars complement the piano nicely throughout the album and, as stated above, the compositions are really solid. While Messes to Miracles is far from groundbreaking, it is still worthy of a listen or two at a minimum. You will likely find yourself noticing the subtleties that make this a better musical listen than most in the genre and you just may find yourself charmed by his voice. As with most, this album won't be for everyone, but for those looking for a solid Biblical message with a slightly differently worship experience, Forrest Wakeman's new album just may fit the bill. - Review date: 5/23/17, written by Michael Weaver of Jesusfreakhideout.com

A longtime musician with an impressive set of credentials, Forrest Wakeman is now releasing his first album comprised of entirely original worship songs. Messes To Miracles is a worship album akin to many others in the genre, though the music and melodies hearken back to a style of corporate worship that would have been very popular in the '90s and early '00s. "The Lion is the Lamb" is a great example, with a cheery pop rock sound, while "Where My Faith Is Found" sounds like something Hillsong would have written some time ago. The dated sound isn't necessarily a criticism - it's more of a way of giving one a picture of what to expect going into the album - but the generic nature of the music and lyrics is hard to ignore. And, unfortunately, though there are six vocalists to be heard across the eleven songs, they don't really add much to the project. Fans of AC radio and corporate worship are most likely to listen to Messes To Miracles and be blessed by it. - Review date: 5/29/17, written by Scott Fryberger of Jesusfreakhideout.com