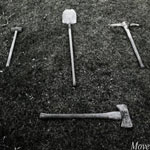 The art of spoken word was something you didn't hear too much about in Christian entertainment for a long time. In the last decade, though, we've gotten excellent artists to have offered up their talents in the field, such as Bradley Hathaway, Levi the Poet, and Propaganda. At the same time, thanks to the internet, which gives anyone, anywhere, and at anytime the power to do whatever they want, we've also gotten loads of people who have a passion for spoken word, with more failures than accomplishments. Enter Chris Bernstorf and his new album Move. I'd be hard pressed to call Bernstorf a failure by any means, but from the very beginning of Move and for its duration, he does very little to distinguish himself from acclaimed yeller Levi the Poet. From the harsh emphasizing of seemingly random words, to the intermittent quick, deep breaths, to the speech patterns, laugh-talking, and out-of-nowhere singing of lyrics; it's nearly identical to Levi's method of performing. If played in the background, you may not be able to tell the difference. It's because of this that I have a hard time listening to it without being annoyed. The words Bernstorf speaks have good intentions that reveal his authentic desire to be a great spoken word artist, but a lot of what he says feels like he may just be trying a little too hard. "O Exuberant Death" is a good example, as he says "O exuberant death, I know your secret, the truth upon which you've woven your pathetic web of farce. You sham, death, you mockery. I know you and your worthless game. You are but a moment, a miniscule speck in time. You are no eternity, no fate to fear, no cause for trepidation." I like the idea of looking at death as just a passageway into eternity instead of something to fear, but the inclusion of bigger, more profound adjectives really only aids in sounding more pretentious than eloquent. "Eschatology and Autopsies" is similar, in that the idea is good - presenting the idea that, upon death and looking at our insides, we can't be told apart from anyone else, be they a terrorist or a nun - but again, it's the words themselves that are lacking. Bernstorf goes on and on a little too long with naming all of the people that one may or may not find to be a "good" or "bad" person on the outside. This continues through all of Move; good ideas with an execution that could be stronger. This style of art is a very acquired taste, so this will appeal to a select few. If you're already a Levi the Poet fan, you may enjoy some of what Chris Bernstorf has to offer, but then again, you may (like myself) find the blatant similarities a little hard to ignore. Either way, this is available for free download from his Bandcamp page. - Review date: 10/26/12, written by Scott Fryberger of Jesusfreakhideout.com