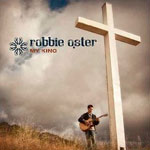 Moorpark, California worship leader, Robbie Oster started leading worship in 2005. A couple of years later (with several years more of playing music behind him), Oster started focusing more on writing and recording his own music. In 2011, he finished his first studio album, My King. Oster's music has a heavy 90s music vibe, but is more like a modern take on the 90s alternative scene than anything. Vocally, he sounds like he could have been in a pop punk band from that era, and then his voice matured some; in fact, think blink 182's Tom DeLonge mixed with a good deal of contemporary vocalist styling. And speaking of Tom DeLonge, there are some instances where Oster's music brings to mind Angels & Airwaves, but less alternative or pop and more contemporary. A lot of the album's music isn't what you would normally expect from a church worship leader; while there is a lot of contemporary influence, the electric guitars and the time signatures that don't always stick to the standard 4/4 timing help My King to stand out a little bit from the pack. "If It Wasn't For You" is an interesting track, as Oster uses several different vocal effects and adds in some electronic music throughout the song. In addition, the track does seem a little spontaneous in some parts where you would normally be able to predict where it's going. Lyrically, Oster asks a pretty simple, but meaningful question: "What would I stand for, what would I fight for, if it wasn't for You?" As you keep listening to My King, you may become more and more surprised at the sounds you hear, with some guitar solos coming out to play, as well as music that may have been inspired by bands like Live, Pearl Jam, Hum, and others. The lyrics are pretty fitting for a worship leader, with Oster praising God's love and faithfulness, in addition to encouraging the listener to seek the freedom that Christ offers. He intimately sings "You are my hope, You're all I need" in the song "Broken Melody." There's a little bit of room for improvement in Oster's singing, but overall, it works nicely with the 90s alternative-influenced music. You may not be sure what to think at the beginning of My King, but as you keep going, you might end up finding quite a bit to like. - Review date: 4/8/12, written by Scott Fryberger of Jesusfreakhideout.com