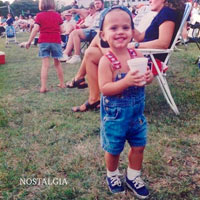 
Nostalgia is the product of writer and musician Griffin Barnes. His 2021 release, NOSTALGIA: The Third, follows in the same vein as his first two (NOSTALGIA: The Album and NOSTALGIA: The Sequel) as a sequel -- making his current releases into a trilogy. Barnes is the sole creator behind Nostalgia and handles all aspects. Barnes takes a humble approach to his craft and continues to work on improving as he goes. Musically, Nostalgia is largely pop or pop/rock with some clear and obvious pop/punk influences. Comparisons to bands like early Hawk Nelson or even Weezer are definitely warranted. A lot of the album falls under what Griffin calls soft pop. These are acoustic guitar and/or piano led songs that are much softer in nature. As a whole, the album largely takes place as life happened for Barnes as the track listing was the order in which the tracks were recorded. The lyrics tackle spiritual issues, like in "I Am Judas" and acting on faith as in "Arizona," to meeting a girlfriend in "The Best Thing to Come Out of 2020," or just general songs with no particular meaning, like "Everything Except the Truth." A few of the songs were written while Barnes was still in high school, but the majority are more recent. The Third offers up a good blend of upbeat and catchy songs with more heartfelt ballads. If you're looking for that pop/punk inspired sound, check out "Sun Don't Wait" or "Arizona." If you'd rather have a ballad, try "1972" or "Everything Except the Truth." For me, the rhythm and sound found on "Here We Go Again" bridges the gap of both styles perfectly and is the best track on the album. On the other hand, production is the weakest aspect of the album. The DYI style and attitude are appreciated, but this an area that could use some improvement -- especially on the more rock centered tracks. The biggest issue that arises is that the vocals are often louder than the music. This makes it hard to really hear what's happening with all of the instrumentation. Regardless, NOSTALGIA: The Third is a fun listen by a new artist with a lot of positive things to say. This is one worth checking out if you're a fan of the genre.
- Review date: 4/2/21, written by Michael Weaver of Jesusfreakhideout.com