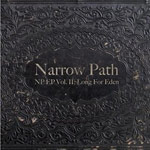 Narrow Path is a rock band from Jasper, Indiana. The group originally started as their church's worship band, but eventually stepped down from that role. Narrow Path currently operates as an outreach band through the Christian Church of Jasper. The group's latest release, NP EP, Vol. II: Long For Eden, is only a short three tracks, but doesn't give a lot of indications of their worship background; that's definitely not a bad thing. The band claims inspiration from other rockers, ranging from Switchfoot to Foo Fighters, and it's pretty evident in their sound. "Oh Lord, Hear Me" opens the EP up on a really positive note and the driving rock track is very likely the best of the trio. "Lift" brings the tempo down as the bass guitar leads the verse while overdriven electric guitars kick in for the chorus, complete with a catchy little lead part between each vocal line. The title track closes the EP with a run time of 7:37 -- nearly longer than the previous songs combined. The song is sort of like an epic the way it is written. It moves along at a slower pace and features a guitar part that is reminiscent of Bon Jovi's "Dead or Alive." The part is far from exact, but will certainly bring the iconic song to mind. The song begins to pick up pace just before the four-minute mark and then moves into a "jam session" of sorts with a really nice guitar solo. The upbeat portion soon fades and the slower acoustic guitar comes back to finish out the number. Overall, this EP is a nice little taste of what Narrow Path has to offer. The songs are solid and the production value is good as well. There's not necessarily enough in three songs to really make them stand out, but there is enough to pique one's interest. Rock fans should give Narrow Path a shot, or check them out at a local event if they live in state. - Review date: 5/7/16, written by Michael Weaver of Jesusfreakhideout.com