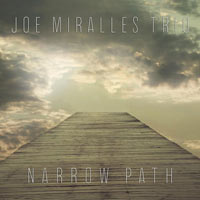 
Singer/songwriter Joe Miralles has spent most of his career as a solo artist, releasing his material at his own steady pace. But after the release of his 2015 EP, Five, Miralles decided it was time to put his creative talent together with other musicians, teaming up with a bassist named Nick Priessnitz and a drummer and keyboardist named Gary Houk to form the Joe Miralles Trio. The trios debut, Narrow Path, makes for an easy transition for longtime listeners, bearing similar sounds and influences as Miralles on his own. Glorious Night gets things started, giving us the EPs strongest offering right at the forefront, with a sound like that of Jars of Clays self-titled debut. Interestingly, it feeds right into Blue, which adds some unexpected country twang to the mix. The title track is a mid-tempo acoustic song with thick bass and a message of hope in Christ coupled with a warning that theres only way to Heaven and its through Him. Something about the sound and the arrangement of the song brings to mind Tom Petty and the Heartbreakers, even Miralles lower vocals. One probably wouldnt mix up the two singers if they were heard side-by-side, though. In an almost jarring change of pace, the trio takes the listener to the realm of bluegrass in I Owe You. Im not entirely convinced that Miralles vocals pair extremely well with bluegrass, but the song works as a whole. The songs structure is rather basic bluegrass, with a two-note bass line and a steel guitar, but its a pleasant sound nonetheless. The EP closes with a unique song (at least contextually) called Break; the chorus boldly sings, You might see some pain, but youre never gonna see me break, and Miralles declares that hes holding onto Jesus through the hard times, because thats where we get the strength to keep going. If youve enjoyed the music of Joe Miralles in the past, but havent yet listened to the Joe Miralles Trio, you can rest assured that youll be getting the same quality of tunes, and in a relatively similar style. Narrow Path is a solid EP that should appeal to fans of classic, acoustic-based rock music, as well as those more partial to the sounds of 90s alternative.
- Review date: 11/18/18, written by Scott Fryberger of Jesusfreakhideout.com