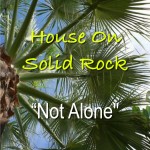 House on Solid Rock
Not Alone


Wichita Falls resident Christian Allbee is the mastermind behind the project House on Solid Rock, a musical outfit that incorporates a wide range of styles in its music while praising the name of God. With only a handful of singles, it's a bit difficult to really gauge the overall sound Allbee will be going for, but one of the more recent singles, "Not Alone," stands out as a bit of a unique track. The musical and vocal melody bring to mind that of the song "Carelessness" by Fair. However, the similarities begin and end there, as "Not Alone" is a rough-sounding, electronic-tinged reggae song with a hint of alternative. The main instruments through the entire song (guitar, bass, and drums) sound fine, even for the low production quality, but the keyboard sounds a little spacey and out of place. Allbee's vocals don't really mesh with the style, as it forces him to be pretty subdued; I'd really be interested to hear how he sounds letting loose on a punk rock song. In fact, even the lyrics of "Not Alone" would work well in a pop punk setting: "I felt adrift everyday, I hated feeling that way, I'd always say that it's a lonely road, I always felt so estranged, life always seemed out of range, then You came to exchange my heavy load." Everything about House on Solid Rock, from the low-budget recording to the stock photo album cover, screams of a DIY mindset of the band members. This can be a really great thing, as the independent music scene is more prevalent than ever today. But it can also be a big hindrance if you don't make the effort to make each aspect of your craft the best that it can be. As a fledgling band in the prime of the individuals' lives, it can only get better for House on Solid Rock, and I'd be happy to hear it when it does.
- Review date: 4/24/18, written by Scott Fryberger of Jesusfreakhideout.com