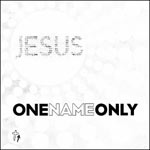 The United Kingdom-based worship project OneNameOnly is an interesting concept; it's a band full of songwriters and musicians that are so focused on putting Jesus in the center of everything, that they're choosing to remain completely anonymous. In a further effort to put Him front and center, the title of their new worship album is the name referenced in "OneNameOnly," Jesus. Theirs is a worship album like many, many others in their genre, sounding as contemporary pop as it gets. They change the sounds up on occasion, such as in "Healing Sound," which mixes a little bit of southern influence (with ample use of a fiddle) with some more Celtic-based harmonies and rhythm. Later on, the song "Made For Praise" has a very subtle hint of Latin flavor, as well as some gospel leanings. The southern gospel traits, such as the organ in "Made For Praise," are evident throughout the album as well. The album's grand finale is a well-done a capella track called "Grace," which features several layers of operatic vocals, both male and female. The end of "Grace" is kind of odd, though; the track features a lot of voices singing their praise, then takes a brief pause, and finishes the last minute with the lead vocalist singing slightly off-key, followed by a lot of laughing and talking in the background. Of course, it's important to have fun doing what you do, but it seemed like a very unnecessary, or maybe inappropriate way, to end the album. But it also seems as if the band is just merely wishing to use their words to worship without really aiming for creating musical and lyrical artistic excellence. If that's all you're really concerned with in your music choices, then you will certainly love this passionate album full of inspiring worship tracks. - Review date: 10/9/12, written by Scott Fryberger of Jesusfreakhideout.com 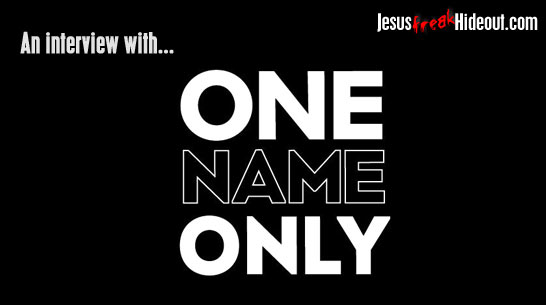 Joel: The vision for OneNameOnly was loosely birthed out of some conversations in 2008 after a weekend at Strawberry Fields (that's right, the same place where the Beatles recorded the classic album, at that time owned by the Salvation Army and being used as a house of prayer!) where we'd gathered a few friends from around the UK for a weekend seeking the Lord. We'd had some times of open worship and done some collaborative songwriting while we were there. A few of us had some experience with recording songs on Christian record labels, but while we were away, we talked about the possibility of pioneering a new way to do it that didn't need a strong branding around an individual or a band. We were talking about whether it would be possible to release worship songs to be used by the wider church without promoting the people who wrote the songs. We never fully articulated the vision at that time. Over the next couple of years, two of us who are now involved in the project had very similar prophetic words, given in different contexts about being "songbirds" who were supposed to release 'a song untainted by ambition that would bless the Church.' Later on, one of the other major contributors wanted to start recording an album in 2010. He was interning in a studio in Kent, UK and wanted a project to get his teeth into. He wanted some raw material to use to enable him to do some creative work on a variety of mixing/mastering/production techniques. We started to record some of the worship songs we'd written going back as far as 2005. As we went through the re-writing/recording process, it felt like the ideas began to coalesce. The developing album felt like it had life in it and a couple of the songs started to be used in various church environments. We re-visited the Strawberry Fields conversations, prayed a bit, talked a bit and came up with the idea of OneNameOnly

Joel: 2 primary songwriters at this stage, although the plan is to invite others on board in future. Alongside them, we've had 10 other worship leaders and songwriters from several churches who've helped with song development. Over 50 people have recorded vocals or instruments on the album.

Joel: No, contributors to this album come from 7 different churches across the UK, and represent 3 church streams (Vineyard, Elim and Baptist churches) We love the multi-church participation to date and would love to grow this over time. We really have a passion for seeing the whole church honouring God together in a spirit of unity, humility and prayer. We'd love to collaborate with a wide cross-section of churches as the project develops.

Joel: I grew up listening to a lot of Deliriou5? and Matt Redman. Aside from those two, at heart I was always a bit of a guitar-loving rocker but in my late teens/early twenties developed a bit of a habit of listening to Motown and old Stevie Wonder records (not sure how that happened!) The other major songwriter on the project studied musical composition at University so he had the chance to absorb a huge sweep of different composers into his musical repertoire, from classical musicians to jazz, rock, progressive stuff and everything else in between. Lately, we've developed a love and familiarity with the Vineyard classics of the last couple of decades (so guys like Andy Park, Brenton Brown, Brian Doerksen and Kevin Prosch). A short time spent visiting IHOP and Bethel left a lasting mark on our worshipping life. We've also probably been influenced by some of the African musical roots from some local Pentecostal churches we've worshipped in from time to time with good friends.

Joel: Not with OneNameOnly, although we've led worship under different banners in the USA, Lebanon and Spain.

Joel: Love the whole Bible! But if I had to pick I'd say either the Gospels, Romans or Galatians. Am developing a love for Revelation too - love the rich prophetic descriptions of Jesus.

Joel: One of the main songwriters is involved with a band called Emphasize, although they're not currently active in performing or recording. The other is involved in a song-writing collective based at the Vineyard church in Birmingham and in some budding city wide inter-church worship gatherings started out of partnership with the Kingdom Worship Movement. Both are involved in leading worship in their local churches. The rest of the artists and song development contributors are involved in a huge range of musical projects at local and national levels.

Joel: Hmmm - all sorts. I'd say personally, I've been learning a lot about the irreplaceable role of the Holy Spirit. In personal matters of integrity and righteousness as well as in the challenges we've been facing in mission to our local neighbourhood, it's becoming ever more clear to me that there's only lasting power and progress when He's allowed free reign. I've also been reading the prophets and learning about the depth and eternal nature of the passion of Jesus. I was particularly struck after going through the stories of a few of the prophets by 1 Peter 1:10-12. Those verses describe Jesus by His Spirit revealing clues about His suffering and the subsequent glory to individuals who made "careful searches and enquiries" before the First Coming. Picking up the intense flavour of the lives and ministries of those prophets as they lived through horrifying times of injustice it just hit me that through all those long centuries, Jesus was concentrating His focus and energy on His commitment to suffer in our place to redeem fallen human beings out of all the mess. The darker it became, the more He was vowing and devoting Himself to go to the cross in our place. It's as if every time a human being strained to hear His voice in all the chaos they'd pick up the same whispers from the heart of Jesus, telling them He was going to lay down His life to fix it all. He made His own choice to lay down His life right in the midst of all the brokenness, as is mentioned in John 10:18, and no amount of human rebellion and evil repeated over thousands of years managed to slow down His determination or quench His zeal. I feel like that's developed a picture for me of just how relentless and passionate He is in His redemptive pursuit of His people. "The light shines in the darkness, and the darkness cannot quench it."