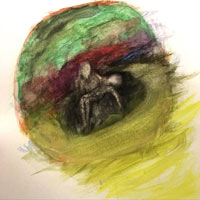 
Eric John Smith is a singer/songwriter/musician from the land of Mickey -- Orlando, Florida. Smith has been in multiple bands over the years, but in all his endeavors, he strives to give God the glory first and foremost. Prodigal Son is Smith's second release following 2016's Mountain Be Moved. Smith lists his main influence as Jason Martin and Starflyer 59. While the music is much more acoustic than Martin's SF59, the vocal approach definitely displays the influence. Musically speaking, Prodigal Son is an excellent listen. The musicianship is solid, the compositions are nice, and the tunes themselves are moving. "Who Would Love Me?" starts things off with one of the better songs on the album. The music and vocal effects sound akin to softer Alice in Chains -- something like "Heaven Beside You" or "Down in a Hole" (especially the unplugged version). The piano led "Be Still" offers a nice change of sound and another album highlight. "Always Be There" changes the pace up a bit for the first (and really only) faster paced song on the album and is also an enjoyable listen. Despite some good tunes prior, "You Are, I Am" is arguably the best overall song on the entire fifteen-track album, while the album closer, and title track, rivals if not surpasses, "Be Still" for the top piano led tune on Prodigal Son. Though the music is entertaining throughout, the album's weakness is in the vocal performances. The vocals are drenched in reverb and similar effects and while sometimes that works, as in "Who Would Love Me?," at other times it's just too much. Smith is all-around a much more talented musician than a vocalist generally speaking. Lyrically, you get a very Christ-centered and gospel-centric message that is always lifting up our Lord and Savior. Eric John Smith's Prodigal Son is an interesting venture. At times, it flashes some pretty high moments, but at others it fails to impress. Fans of indie rock and acoustic rock will be best suited for this release. For those interested in checking out Smith's work, he has both Prodigal Son and Mountain Be Moved available on Bandcamp with a "name your own price" option. Give this talented multi-instrumentalist a listen today.
- Review date: 8/3/17, written by Michael Weaver of Jesusfreakhideout.com