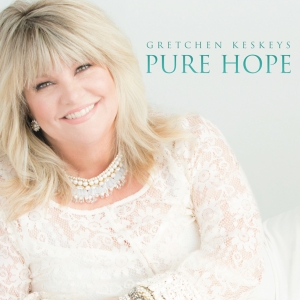 
Gretchen Keskeys released her debut album, Walking in the Spirit, just last year, but since its release, she's gone on to perform on a variety of Christian TV and radio programs in support of it. Now the former Warehouse Christian Ministries worship leader is riding that momentum and giving listeners a brand new album this summer. Some of the songs on Pure Hope actually came from her experience of releasing Walking in the Spirit, such as "Pure Hope" and "Adversity." Songs such as these, as well as the overall message of the album as a whole, is one of acknowledging your anxiety and doubt, but trusting and hoping in Jesus, knowing that He brings all things to perfection, and that He is always good, even through our darker times. This theme is especially prevalent in the final two tracks, "Never Forget He Is King" and "Grace is the Final Word," where Keskeys solidifies where she's placed her hope through her experiences in the past year. Musically, Pure Hope is a combination of country music, southern-influenced contemporary pop, and southern gospel (listen to "Forgiven Once Again" for the ultimate blend of her sounds). Keskeys' voice finds itself in sync with the music pretty often, but sometimes it seems as if her vocals might be better suited for a less southern take on contemporary; admittedly, I'd be interested to hear how her voice works with something more akin to a Hillsong track. But as it stands, Pure Hope is an uplifting album that will touch the souls of its listeners, from an artist who's been very open about needing that same touch.
- Review date: 6/26/17, written by Scott Fryberger of Jesusfreakhideout.com