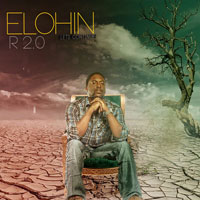 
Detroit rapper Elohin (Lon Harris) recently released his sophomore album, R2.0 Let's Continue -- produced by J.R. and other acclaimed production studios. On R2.0, Elohin brings his creative nature out. Thankfully, this means listeners don't get a ton of the trap rap and triplets dominating today's hip-hop scene. The sound you do get is a mix of straightforward rap along with some R&B stylings. Most of the songs contain a feature and many of them (at least in the first half) feature female vocals in the chorus. The album starts off in a pretty provocative manner with "Miss America." In the lyrics, Elohin points out flaws in our country, but goes on to call the United States a terrorist nation. One of the most trying lyrics comes when he raps about September 11th, "9/11 sent our military in reaction. Rest in peace to the lives lost, it was tragic, but America is guilty of the same infraction." It's a rough line that some may agree with, but many more will have likely a serious issue with. The depth and approach of the opening track sets the album off kilter a bit and makes it uncomfortable from the start; a track this weighty would've been better served as a closer, or at least a pushed off a little later into the track list. Unfortunately, it takes a little time to recover from, but thankfully R2.0 hits its stride with three really solid tracks in a row when "Talking," "Man on the Bus (1995)," and "When the Smoke Clears" play in succession. Overall, "Talking" is probably the best song sonically, but the story of "Man on the Bus (1995)" possibly makes it the best overall. As the album comes to a close, "Enough" comes out as another great song on the record. The album's closer is another heavy song much like "Miss America" -- this one tackling racism and violence. In the first half of the track, the lyrics condemn police violence and retaliation against police officers, but the second is a mock interview with Elohin, Martin Luther King, Jr, and Malcom X. Elohin uses recorded statements from the civil rights activists to answer his own questions. However, just like with "Miss America," the usage of Malcom X has to ability to draw equal amounts praise and criticism depending on the listener. In the end, R2.0 Let's Continue has some really solid moments -- "Talking," "Man on the Bus (1995)," and "Enough" all capture the best Elohin has to offer from the musical, to the lyrical, to the flow and delivery of his rhymes. Elohin tackles social issues, but proclaims Christ and puts a positive spin on his lyrics. R2.0 isn't a revolutionary album, but it certainly has the ability to provide enjoyment for many hip-hop fans.
- Review date: 2/7/18, written by Michael Weaver of Jesusfreakhideout.com