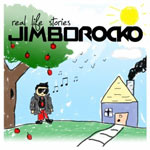 Pop musician James Larrick, aka Jimbo Rocko, released a five-song EP in 2010 called Future Sounds. His signature style was urban, auto-tune laced party pop music, which, if nothing else, sounds fun, but the EP as a whole was underwhelming. Two years later, Jimbo Rocko is back with five more songs that have a different musical focus for his new EP Real Life Stories. The sound shift is rather interesting; while Future Sounds tried very hard to make Christian-themed club music, Real Life Stories makes the attempt at producing radio-friendly pop rock. "Alive" is the one exception, using electronics (including synthesizers and synthetic drums) for the music, but the rest features the traditional pop rock instrumentation. The opener, "Retro," is actually borderline Jason Mraz-material with its pop-reggae feel. It's a rough opener, as the lyrics are super cheesy ("Everything is gonna be alright, let's sing about love and marshmallow clouds, forget about our problems and escape from the crowd, don't wanna think about work, I might just take a nap, not a care in the world, I got my chair leaned back"), and Jimbo's vocals are out of tune (even with the noticeable misuse of auto-tune) and don't match the music very well. He's joined by a vocalist who goes by Lazzara, who provides a rap at the end that suggests that he's not really a rapper. "More Than Enough" is a ballad that turns out a lot better than the previous song. It's pretty generic positive-message pop rock balladry that could've been written by a number of radio bands, and his voice still lacks here, but it's hopeful in that it sounds like Jimbo may have found his sound. Of his two EPs, this is the best song he's released yet. Jimbo Rocko's Real Life Stories is a definite improvement upon Future Sounds, but it's still very lacking in overall quality. The biggest recommendation I would give Jimbo is to work on the vocals. Check out Real Life Stories if you feel so inclined, and if you do, go with "More Than Enough" and the closer "Hold You." - Review date: 7/9/12, written by Scott Fryberger of Jesusfreakhideout.com 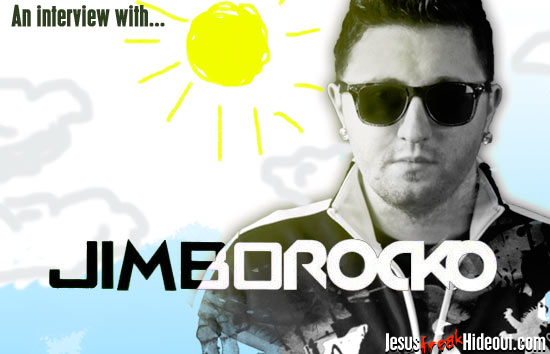 Jimbo Rocko: This nickname goes back to 2005 when I was the drummer for a touring Christian Punk/Rock band, Right Lane. People used to tell me I took drum lessons from Animal (The Muppets). So you can imagine, I am pretty animated when on stage. Anyways, we had a show somewhere in Kentucky with Family Force 5 at the Winter Jam After Party, and a girl came up to me after the concert wanting a high-five and continued to say "Yo!! Jimbo!! You Rock-ooo!" and my band mates were like "Heyyyy!!! It's Jimbo Rocko!" and basically, the name just stuck! haha

Jimbo Rocko: To be honest, no lol. Most people can't pronounce my real last name correctly anyways. Plus, I feel "Jimbo Rocko" just rolls off the tongue well. And it's catchy (if you ask me).

Jimbo Rocko: The original goal for when I decided to make music on my own was to combine all of the music styles that I love into one big mix of genres. With Future Sounds, I had just stepped away from being a producer and emcee for a Christian Rap band, Unforsaken, and so the Club/Hip-Hop style was something I was familiar with at the time. With Real Life Stories, I didn't force any particular style upon the songs; I just let them become themselves. Not to mention, most of the songs off Real Life Stories were written using a guitar or piano, while Future Sounds was written using synthesizers and beat machines.

Jimbo Rocko: Yes. There is a real life and personal story behind each song, in exception to maybe "Retro" which is just a fun-summertime-loving song. I wrote that in the winter thinking about how much I miss the summer breeze, BBQs, and hanging out with friends.

Jimbo Rocko: This song is actually a conversation between God and myself, written from His point of view. See, back in August of 2011, my relationship with my daughter's mom had just crumbled. I was on the verge of losing my job. I didn't feel very much like a Christian. I have a kid out of wedlock. I knew people were looking up to me and I felt like I let them and myself down. There was just so much heart break, confusion and depression during that time of my life. I remember one night, sitting in my living room and I thought "if it weren't for my daughter here right now, I wouldn't care what happens to me. I could die right now, and I would not care." But it was in that moment that God came to me, probably more so than any other time in my life. He came to me and said "Why are you thinking this way? Do you think that this is all just an accident? There is a reason why you are here. There is a reason why you are going through all of this right now. I love you. I never want to hurt you. But sometimes you must experience pain in order to become stronger. I have great plans for you and your time is coming that I will use you for all I have created you for." That was the single, most powerful moment in my life. After wiping away my tears, I picked up my guitar and penned the entire song that night; it was beautiful.

Jimbo Rocko: Lazzara is actually a good friend of mine. I helped me write a few songs for my previous record, Future Sounds. Back then, he went by the name "Jaylee." He's a very deep dude, very close to God and his music reflects that! I believe his style is more geared towards the non-believer crowd. He's doing big things, man! I don't know what else to say. LOL Check him out on iTunes if you get the chance. His album, Rhyme With Reason, released the same day as my record, Real Life Stories.

Jimbo Rocko: Yes.. well, mostly yes. I did have some outside help on a few songs. My friend Ben Crespo of L.E.D. (Light Ends Darkness) helped me write parts of "Alive." I had a hand from David Meadows (Get In The Ark) with lyrics and guitar on "Hold You." Lazzara pitched in on "Retro" with me, and Mel Burns (Remembering Venice) performed some backing vocals on "Hello" as well as "Hold You."

Jimbo Rocko: Faith!! I know it sounds simple, and it's probably one of the most taught doctrines within the church, but it is still a daily struggle. I'm learning that if we speak positive, uplifting and encouraging words into our own lives and the lives of others that we are actually speaking things into existence. Learning to say things like "I can" and "I will" are MUCH more powerful than "I hope" or "I'll try." Learning to rely fully on God can be hard. Some people will argue and say "let's be realistic" but truth is, when is God ever realistic? Ever? It wasn't very realistic for Peter to walk on water. It wasn't realistic for Samson to fight and kill a lion. Who does that? That is just crazy! But I know they did this because of their blind faith in the Lord. That's the type of faith I am striving for. Once we have that kind of faith, who can stop us?