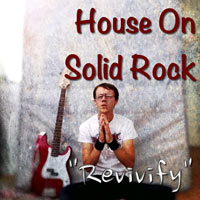 
Christian Joseph Allbee is an indie artist who goes by the name House On Solid Rock. Allbee recently released his newest, self-produced, single back in April. The name of the song is "Revivify," which simply means, to give new life. The song has a melody somewhat similar to Blink-182's "Don't Leave Me," but musically sounds nothing like the 1999 pop/punk tune. In the first verse, the lyrics talk about how God has saved him from a childhood of depression and a life of troubles, while the chorus focuses on how God's love has breathed new life into him. The second verse finds Christian looking to share his story and this new life with others. The song itself contains several different instruments with keyboard, acoustic guitar, electric guitar, bass, and drums being featured prominently. The song is self-produced and definitely carries that sound. While the production isn't what you're used to hearing from a professional release, the instruments and vocals are mixed quite nicely. If you're looking for an uplifting song that talks about God's love and power to change our lives, "Revivify" just might fit the bill.
- Review date: 8/13/18, written by Michael Weaver of Jesusfreakhideout.com