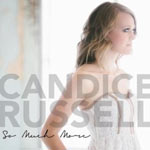 Candice Russell
So Much More

Candice Russell made her start on American Idol. Now she is releasing her first album, So Much More. Upon first listen, the music sounds pretty good. Her voice is reminiscent of Taylor Swift or Demi Lovato, but in the areas where these artists excel, Candice doesn't really match up. The actual tracks sound good, the lyrics are clear and well written, and each song is sung well. Additionally, there is nothing wrong with the production of the music, it was clearly done by a studio that knows music. However, the album's biggest problem is that it's a bit too slow paced and therefore may fail to truly engage Russell's listeners. Although Candice's voice is beautiful, the style and composition of the songs don't really present anything dynamic. As a whole, these tracks don't offer much change of pace from one track to another. Nearly every song is the same tempo, and nearly every song has the same flow. Because of this, there is little differentiation between each piece, creating a loss of focus for the album. The tracks are very mellow, and as a result, much of the lyrical and musical content is lost in monotony. With that being said, there are still a few songs that break the mold and stand out. "Escape" is an interesting piece that seemed to capture the intangible something that draws the listener in. "Good Luck With That" offered a more upbeat change of pace from the rest of the bunch, which was refreshing. But the second half of the album runs from one song to another, each one sounding much like the one before it. Candice is a talented artist. She has potential to set herself apart. Russell could really benefit from finding a sound to call her own. If you are looking for a primarily mellow female vocalist, her music will be a good fit for you. But if you are looking for a more dynamic artist who will engage you, it may be best to look elsewhere. - Review date: 9/12/13, written by Aaron Alford of Jesusfreakhideout.com