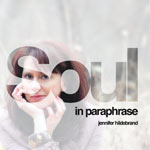 Jennifer Hildebrand is a singer/songwriter from Texas. Her music has some folk inspiration, but largely comes off sounding more country in tenor. In her new album, Soul in Paraphrase, Jennifer sets out to explore experiences like redemption and relationships. The music is largely acoustic guitar and piano, but in songs like "Bitter Waters," you get a nice bluesy electric lead guitar throughout; it's very likely the best sounding track on the album. "Live Around the Pain" is also a song of note though. Hildebrand uses the imagery of an old oak tree to tell a story about herself -- and the human condition in general. She sings early, "There's a rusty fence that cuts right through him like an old war wound that'll never say goodbye. And his skin's grown tough wrapped up around that injury." She follows in the chorus with, "Then you have to learn to live around the pain. You learn to love and live around the pain." Even later in the song, she completes the comparison as she sings, "And my soul's grown tough wrapped up around that injury." It's a pretty cool analogy and the acoustic guitar makes it an extremely likeable and catchy song. Jennifer's voice is very fitting for this blend of country, folk, and worship. It's not really twangy, but works nicely in the genre she has set for herself. Beyond the two previously mentioned songs, other notable numbers are the 90s feel of "Thirsty" (though it could have benefitted greatly from more overdrive in the guitars in the chorus and bridge) and softly-picked "Ferocious Love (Enough)." Jennifer Hildebrand has written a collection of songs that make you think and also praise God completely. Her music is very accessible to fans of worship music that leans toward the more folk or country side, and you won't be disappointed with her charming voice. If you're looking for a new album from someone you may not know, give Soul in Paraphrase a listen. - Review date: 2/2/16, written by Michael Weaver of Jesusfreakhideout.com