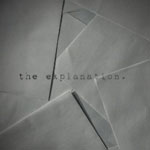 Robert Harris is a man of many trades; from programming, mixing, and producing albums to writing and performing his own music, he knows the technical aspects of music inside and out. In 2013, he is debuting his very first album, under the project name The Explanation. And his self-titled debut is sure to catch the ears of some fans with his untypical approach to pop music. The Explanation is a rather interesting ride at first, with the opening song, "The Circuit," taking on a very heavy Metric influence (specifically their song "Gold Guns Girls"). It's certainly not a bad thing to be influenced by Metric, though the song does sound almost too much like them without retaining the same level of quality (Kristen Brutto, from a band called My Cousin Karma, provides vocals, and her voice even sounds similar to Metric's Emily Haines). Regardless, it's a relatively strong opener, but, unfortunately, the album goes south from there. The following track, "Sinking Slowly," turns up the rock exponentially, with a heavier punk sound. I like the heaviness of it, but the music and vocals almost seem off-beat or out of sync. The song's verses are performed by Harris, and the chorus and screams near the end are done by Andrew Hyatt and Josh Wright, respectively. I like the vocals, but the chaotic nature and screaming make this track feel like it doesn't belong on this particular album. The rest of the album is mostly different, with little rock influence and a lot more dance pop sound, like something you would hear from Press Play. Following a short interlude comes a couple of very poorly-done, highly-autotuned, mind-numbing electronic pop songs that could put the unprepared listener in shock due to the drastic change in sound. The interlude does help cushion the change a little bit, but it can only do so much in its twenty-second lifespan. "Live. Love." has some guitar, but it's light and, at times, drowned out by the synth and the schizophrenic, heavily-sampled rap vocals. A few tracks later, the rock music re-enters in "Adam's Song." The track sounds like it could have been a b-side from Skillet's Alien Youth album. The rhythm, the placement of the synth, and the vocal melody all have Skillet tendencies, while the vocals sound like they might be trying imitate John Cooper's gravelly pipes. Despite the overly-similar nature, it is one of the stronger tracks The Explanation has to offer here (and the guitar solo from Love Sound Movement's Dave Carlson takes it to another level). Other musically strong endeavors, relatively speaking, are the two opening tracks, as well as the two instrumental pieces, "Dancing In Germany" and "Don't They Know, It's the End of the World?" Harris really shines here, and in future releases, it might do him well to expand what he does here into a full-length album. They are relatively dancey and poppy, but they show the capability to do these styles with finesse and talent. In the end, I'm left feeling a little underwhelmed by The Explanation's first offering. Harris obviously possesses a lot of musical talent and the proper production skills beneficial for an independent artist, but the genre-hopping is a little too drastic sometimes, especially considering that Harris' rock music is of a much higher caliber than his pop and dance music. The Explanation is a rough start for a rather promising artist, but if you give it a listen, don't be surprised if you like a few of his songs. - Review date: 3/31/13, written by Scott Fryberger of Jesusfreakhideout.com