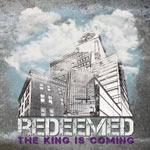 Redeemed
The King Is Coming

A group of five friends who love Jesus and music, Redeemed exists to sing their praises to the God who created them. In 2011, they recorded their debut full length album, entitled The King Is Coming. Redeemed's sound is quite recognizable from the get-go; you may not have heard them before (or heard of them), but as a Christian music fan, you've undoubtedly heard your fair share of bands that sound just like them. Let me pinpoint their specific sound a little more precisely: imagine a merging of Hillsong and Hawk Nelson, with Hillsong as the foundation and structure and Hawk providing musical and vocal influence, and you have a good idea of what to expect before listening to The King Is Coming. Lead vocalist Mario Salazar has a very nasally voice but it seems to be a good fit for most of the album's music. On that note, Redeemed will go over well with fans of the "worship genre" (for lack of a better term) who also appreciate some alternative and/or pop rock sounds to go along with it. That being said, The King Is Coming is noticeably weak in an artistic sense. Sure, the members of Redeemed are talented with their instruments, but the songwriting and lyricism leave a lot to be desired. "You Are God" uses lyrics like "From everlasting to everlasting You are God, every ending is Your unfailing love, You are God and do not change, You are Lord," while using the standard SONICFLOOd-like, late 90s alternative pop ballad mould. "The King Is Coming" is a little heavier, but is still set to the loud, "worship anthem" sound with the overly-reverbed guitars. The chorus' lyricism complements the music, singing "Forever the world will know, the King is coming, glory hallelujah, the Spirit and the Church say 'Come Jesus come.'" Some of the weakest of Redeemed's lyrics come from the song "Eternity Would Not Suffice." "You raised the dust, created man, Your thoughts for us are as grains of sand, Your love we'll never understand...we give You glory, we give You glory, we give You glory to You God"; not only is the last part slightly redundant, but the rest features awkward structuring of the English language just so that the song would rhyme. The rest of the album is more well-written than this particularly problematic track, but I would still hesitate to call any of it especially strong. With some attention to production, Redeemed has potential for some airplay on K-Love and other similar stations, and could increase their fanbase to include fans of the above-mentioned bands, or (possibly) fans of Jeremy Camp or The City Harmonic. - Review date: 4/6/13, written by Scott Fryberger of Jesusfreakhideout.com