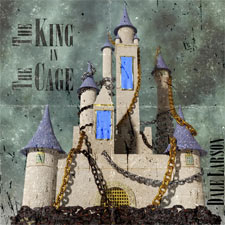 Dale Larson
The King in the Cage


Scripture songs have grown in popularity over the past decade, with some groups making that their speciality. Most of the time, they're singing the Bible verbatim, and backing it with a folk or piano driven track. Dale Larson, making his music debut with The King in the Cage, shakes up the formula. His focus is on the book of Ecclesiastes, but he doesn't sing it line by line. There are moments when he does pull whole verses out and put them to music, but most of the time, he pulls out the thought behind the passage and even adds some New Testament understanding (like on "Ecclesiastes 12," where he points out God making all things new, including us). But Larson also shakes things up musically, opting for a heavy rock approach to the words of the Preacher. Sometimes it feels like Swedish metal with the use of strings and synth (think Narnia); sometimes it feels like pop rock, and other times (especially when the acoustic guitar makes a rare appearance), it sends one back to the days of '90s rock bands doing a soft ballad (some of Bride's material comes to mind). Giving Ecclesiastes a rock feel actually works as the angst that often associates itself with the genre lends some personality to the wrestlings of the Preacher. In fact, the music is the strongest point of the album, using subtle touches of variety in each song and all the instruments being mixed well. Larson's voice is the weakest part, musically. There are moments where his range feels stretched or he could use some stronger backing vocals to flesh out his voice. And while Scripture songs tend to feel somewhat awkward in their phrasing and rhythm lyrically, it still comes off jarring and The King in the Cage suffers from that pitfall of the medium. Still, it is worth applauding Dale Larson on completing this epic project. If you know the book well (I'm a fan, personally), you can listen along and know which chapter you're in and gain a new perspective based on how Larson interprets it. The album has its weaknesses, but fans of Scripture songs who are looking for something with a little more musical meat to it should find The King in the Cage satisfying.
- Review date: 11/4/21, written by John Underdown of Jesusfreakhideout.com