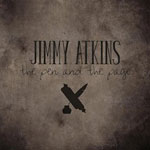 Jimmy Atkins
The Pen & The Page

The terms "solo project" and "side project" should not be unfamiliar for any avid music fan. Sometimes a member of a band - large or small, popular or obscure - has more musical leanings that might not fit within the confines of the main act, so a new project is born. Thus is the case with Jimmy Atkins, lead singer of North Carolina-based pop rock band Second Hand City. Atkins' first solo album, The Pen & the Page has Second Hand City influence first and foremost, but it also feels a little more contemporary than the full band. Atkins demonstrates some of his poetry in The Pen & the Page, which is accompanied by a simple acoustic melody in the background, and follows it up with a folk tune, titled "Calls From The Sea." It features [what sounds like] fabricated ocean waves in the background, with some banjo and ukelele maintaining the structure of the song. The album's other songs are akin to bands like Smalltown Poets, or a more contemporary Jars of Clay, which should appeal to plenty of Christian music fans. Further still, Atkins' lyrics (which, here, were written at various times and as far back as 2008) bring glory to God and His love. Take "Arise," for instance, which displays Atkins' need for the Lord: "Can You hear me crying out to You? Can You see me reaching up to You? Arise and be my resurrection, arise and let me be revived, for You alone are my salvation, arise and bring my soul to life." Interestingly, when you compare the older material with the newer (the newest being the final two songs, which were written in 2014 and 2015), you can really see Atkins' lyrical style change from straight-forward to more poetic in nature. "Calls From The Sea" comes to mind: "The salt, salt sea, she sings to me under a blanket of stars, and here I be upon that sea and dream of the warmth of your arms, and many a man has tried his own hand out on the ocean deep, and some might say they've lost their way following calls from the sea." It's a very noticeable change in lyricism. Now that Second Hand City seems to have hung up their instruments, it's extremely likely that we've not heard the last of Jimmy Atkins and his solo material. Fans of contemporary pop music will be pleased with The Pen & the Page and may even want to listen to the full band's material as well. - Review date: 8/4/15, written by Scott Fryberger of Jesusfreakhideout.com 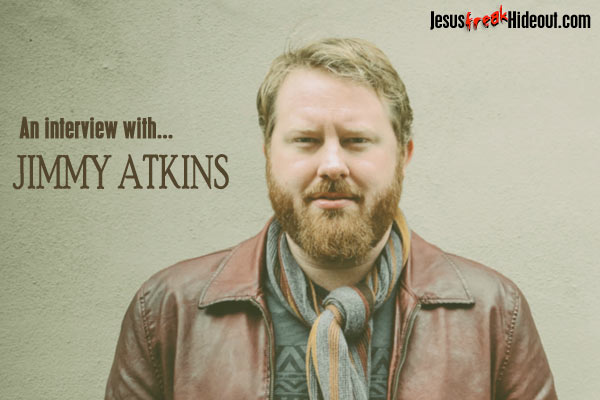 Jimmy Atkins: I was around 14 years old, about the time I began to learn to play the guitar.

Jimmy: I've been a part of Second Hand City for over 10 years. It was initially born out of a praise team from a church youth group I was part of, but after graduating high school, my dad gave me the name Elishah (from his traveling band days) to use for the band. It means "God is salvation" in Hebrew, and really hit home for me as far as what I wanted to accomplish with the group. We played, recorded, and traveled for the next decade or more, and concluded in March of 2015. The band came to a natural end with the guys all moving to different cities and taking up positions in churches I saw it as an answer to a prayer that I'd been praying. It was clear that God wanted us to move to the next chapter of our lives, and along with a lack of opportunities to play, it seemed that the moves to other parts of the country was the fleece I was looking for. We're all great friends to this day and love each other very much all of the guys are so supportive of each others' endeavors, and that's another sign to me that Christ was central to the shift.

Jimmy: I'm in the early stages of the solo career, and I believe it's definitely something Christ has called me to do as often as I'm able. I used to be torn about the difference between being a traveling musician and a stay-at-home worship pastor, but I'm beginning to see that Christ's call on my life includes all of it, so I don't really see it as intermittent He takes care of all my and my family's needs, so when opportunity arises (sometimes without working, and often from seeking it out), I do what I always do. I do believe that I have a unique platform, and that is that I'm able to lead worship to bodies of believers at home and abroad, particularly with songs they'd know well that I didn't write, but I'm also pushing hard to share the stories behind the songs I've written and recorded to edify the Church. Listening is really important in the life of a Christian, and it's a parallel to singing loud as a group, so I'm ecstatic that I get to do both and call it all "my job."

Jimmy: Not really. Actually, I was a poet before a songwriter, but I only played hand percussion, and didn't have an outlet to melodically write songs. Some of my early poems seemed more song-like, so I picked up guitar just to put background to melodies. Now that I've been writing for a long while, I find myself drawn to writing poetry again. Some of the deeper ideas that I don't know how to fit into a 3-4 minute song find their life in poetic form. And I'm really a fan of old-school poetry and rhyme. I like the more "predictable" meter of that style of poetry, and I feel like I win big when I'm able to say what I mean with the limitations of trying to find rhymes that fit. The Pen & the Page was the last thing to be recorded, but really locked in what I was trying to say about writing songs without itself becoming a song. It's my first time reading poetry in recording or even live, and while it's strange to me, it's really freeing.

Jimmy: I'd say it was somewhat intentional. My brother, who was in my band with me, once told me that I was a "blatant" writer; he meant that I write exactly what I mean in a way that deep thinkers and casual listeners can both catch the first time through a song. A lot of my Elishah/Second Hand City songs are that way. I really wanted this album to cover the gamut of what I was able to do at the time. The whole notion of the title is that these songs, more or less, were stuck in the pages of a journal and never saw the light of day until recently. But I was also writing at the same time as recording, and a lot of the newer songs felt so good to play and get out of my heart and head that I wanted to include them. I wanted to be a writer that wrote about what inspired me, not JUST what happened to me, you know? "Calls from the Sea," for example, was a song that wrote itself, as they say, after I finished playing an iPad game that had a sailor's life story as its foundation. It opened me up to write more broadly, for sure, and I love that.

Jimmy: I'll start with Downhere. They were the band that kept me believing I could do this for life when I was almost ready to give up completely years ago. Since then, I've worked with Jason Germain, who masters my work, and consider him an inspiration, mentor, and friend. I'm always drawn to John Mark McMillan, both musically and spiritually. I LOVE James Taylor, and I can listen to Bebo Norman, Jason Gray, and Andrew Peterson anytime. I'm a huge Coldplay fan, too. Oh, and I LOVE 80's pop: Peter Gabriel, Springsteen, Bruce Hornsby, you name it. Instrumentally, I really like to branch out to play acoustic guitar differently. Andy McKee is always on my phone, and I really dig Matt Kidd and his Aural Method work.

Jimmy: I'm definitely an extroverted introvert that is, I love to share onstage, perform, and lead worship. I love writing and playing, so a lot of spare time is taken up with that. But I LOVE hanging out with my wife. We're always finding something to binge-watch on Netflix or Amazon, and we laugh a lot together. She's the only person I can really be around all of the time and still get rest. Honestly, our life together is where I gather the most inspiration to write new material.

Jimmy: "Try" is my first single, "Seasons Changing," was released a couple of years ago, and "Enough" has a lot of cool instrumental intricacies, so between them, it's a hard decision. But I'd probably say "Try," simply because it would relate musically to the most people right off the batthen they could take the journey with me through the rest to know me a little better as an artist. That's the hope, anyway.

Jimmy: So much. Particularly, this new venture of solo musicianship is teaching me to be like my songs -- gentle-spirited. I really feel that I'm able to approach people with open hands a lot more easily because of the freedom to tell the deepest parts of me to people to help them walk closer with Christ. I've been astounded by the overall positive and gracious reception by those who I've played for since March. What I once thought were songs dear to me, but probably not for everyone else, are now songs that seem to be helping the Church be honest with herself and come to a better understanding of her position with Christ.