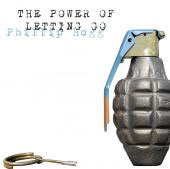 Kentucky musician Phillip Hogg is no stranger to music. He's been making it since he was twelve years old. He only has two albums to his name, though. The first came in 2003, an album called The Invisible Band. His follow-up is a lot more recent. The Power of Letting Go is his second venture and, like his first album, was entirely self-produced. In addition, Hogg is the only musician you'll hear on either of the albums. He shows himself to be pretty talented, managing to write and perform every aspect of the albums, and maintain a clear sound during the production stage. As far as the music goes, it's not too shabby. It's mostly based on rock music, with aspects of acoustic, folk and funk mixed in as well. In The Power of Letting Go, you can hear traces of modern rock like Red, as well as 90s influence like Collective Soul. Nothing really stand-out or amazing, but he demonstrates his musicianship, and his talent is noticeable. Some of the music does sound slightly dated, and it can get uninteresting at times, which seems to be one of the main weaknesses. The other big weakness is a lack of creativity. It doesn't feel like Hogg is making sounds that he can call his own. I'd like to see him venture out a bit and maybe try something new. I think he would reach a great deal more people with his wonderful message if he were to step up his game in that way.