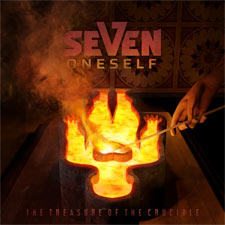 Sevenoneself
The Treasure of the Crucible


Sevenoneself is the project of Canadian musician Barry Peters. Peters is a classically trained pianist who loves rock and metal music and decided to make some music in Saskatchewan where this is no music scene. Being involved in worship music, and as a former pastor, he wrote a rock album around his faith. Not only did he play every instrument, but he also edited, mixed, and produced the album completely solo. The Treasure of the Crucible took him about 7 years to complete, but Sevenoneself's debut album is finally available!

First off, the musicianship on this album is incredible -- especially the guitars. Peters rips out some blistering guitar solos and licks that are executed with pure precision. The guitar work is my personal favorite part of the album's music, but the supporting instrumentation is also done very well. The production is very impressive given the budget he was working with and the way he recorded. All of the instruments and vocals were recorded through a budget 8-track recorder and the drums were all programmed with open source software. However, the results here sound far better than a lot of indie artists are able to accomplish with less. Oh yeah, did I mention that the guitars are insane? I think my favorite track here is the title track. In the song, Barry sings, "This is the treasure of the crucible. This is the gain; this is the glory of bearing the unbearable. This is the purging of resentments and anxiety, of wickedness and vanity and transforms into beauty what endures." I particularly like this section because Peters mentioned that one of the reasons he did the album completely solo was due to anxiety. Not only is this an entertaining song, but I appreciate that he calls out his own issue in a victorious manner. I quite enjoyed his cover of "Victory in Jesus," as I'm a sucker for old school hymns. The weakest part of the album comes down to vocals, but that's simply a taste thing. The vocals are well-recorded and on pitch for sure. At times, though, I feel a slightly more commanding voice would serve the songs a little better. However, it's a pretty slight nitpick as Peters' voice is completely serviceable.

The Treasure of the Crucible is an impressive musical venture. You can clearly tell that Barry Peters is an extremely talented musician. If you're into guitar driven rock n' roll, then Sevenoneself is a great place to go for a listen. The expert level playing, mixed with well-written songs, and great production makes this album an easy listen. Congratulations to Barry Peters for overcoming personal struggles and other limitations to be able to release such a great sounding album. This one should serve as inspiration for anyone that thinks they don't have enough money to make good sounding music, is too scared, or any one of a thousand other excuses. Barry Peters has proven just the opposite with Sevenoneself and The Treasure of the Crucible.