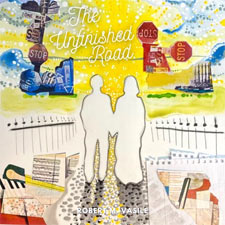 Robert M Vasile is a 70-year-old songwriter born in Brooklyn New York, who has previous experience in a band in the 90s. He plays a variety of instruments and has been on worship teams in a handful of states across the U.S. As far as I can tell, this is his solo debut album, titled The Unfinished Road and it features strong Americana, Bluegrass, and Gospel instrumentation like banjo, mandolin, and fiddle.

The first track, "The Rescue," has a James Bond-like theme running as an undercurrent beneath the plucked banjo and acoustic guitar strum. It's an unexpected beginning, but it works. "The Lord is My Light" follows with the kind of country shuffle that fans of Johnny Cash would appreciate, while "How Firm a Foundation" is a foot-stompin' party hoedown. Other highlights are the gentle spirit of the tune "Calvary," and the Randy Newman-ish quirkiness in the song "The Repair Job."

The Unfinished Road is mostly a good time, though the sameness in the sound of a few tracks leave some of it a blur, particularly the latter half of the tracklisting. All in all, though, this album is well done and certainly of interest for fans of Johnny Cash, Bob Dylan, and the Americana sounds that it employs, especially if they like their Americana with a dash of charm.