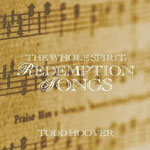 Phoenix, Arizona-based singer/songwriter and theological seminary student Todd Hoover has been hard at work lately both earning his degree and writing songs for his new album, The Whole Spirit: Redemption Songs. The style of music that Hoover best fits into is something like what you might call "gypsy music." It's very folksy and a little hard to get into unless you're in the absolute right mood. The first three tracks follow this pattern, singing about God's continued faithfulness over the years and His promise to help us last through difficult times, but then the fourth track, "Weaklings," changes pretty dramatically, mellowing out a lot into just Hoover's voice over a softly-played piano. This leads into an eleven-minute-long instrumental interlude called "Death" designed for reflection and worship. It's composed of mostly piano, with some subtle Celtic sounds for added effect, and the tempo varies from almost dirge-like slow (appropriate for the title), to just a little bit faster than that. It's a beautiful piece though, and can be a good addition to the listener's personal moments of worship. "Death" flows seamlessly into the appropriately-following "Resurrection," which starts with the same sort of piano sound but then goes back into the style that Hoover and band brought us in the first three tracks: very indie/folk, with acoustic guitar, bongo-style drums, fiddle, and several singers singing at the same time. Hoover himself sounds like he would've made a fine "Jesus Music" singer in the 70s, and he has pretty much tailored the music to fit that sound. What I found interesting, and pretty cool really, was the end of "Working/Waiting," which brought in the lyrics and melody of the final moments of "Jubilant Noise." I wasn't too attracted to that portion of the song, but their recalling of it was a good move. Todd Hoover's The Whole Spirit: Redemption Song is an interesting one; it's not very accessible as far as music goes, but to the right ears, it can be golden. If you're a fan of groups like The Psalters, you may want to head over to Hoover's Bandcamp and procure yourself a copy. - Review date: 6/28/12, written by Scott Fryberger of Jesusfreakhideout.com