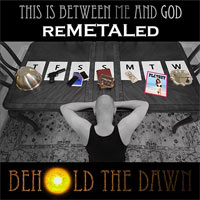 Behold the Dawn
This Is Between Me and God Remetaled


Three years after the release of Oh God What Have I Done, the hard rock/metal project known as Behold the Dawn is back with album number two, This Is Between Me and God Remetaled. It's a sequel of sorts, as Behold the Dawn exists to tell an ongoing story about a follower of Christ in a world of sin and temptation, but it's also a revised and remastered (and of course "remetaled") version of an album originally released in 2016. The album still sounds like a natural follow-up, though, as it follows its "predecessor" in a number of ways, from the boldness of the lyrics, which are saturated with Scripture, to the overall style, sound, and production, which does sound improved over Oh God What Have I Done. Musically, the style goes anywhere from a Disciple/Staple-esque hard rock to pummeling, blistering metalcore. Similar to the previous album, there's a noticeable lack of production that keeps some of the stronger and heavier moments from reaching their full potential. Occasionally, an instrument might be a bit out of tune or flat, but most of the sound issues lie in the guitar tones and vocals, which could really sell the album if they got the right producer to increase the sound quality. Lyrically, as mentioned above, all of the songs are based on the Word of God. Sometimes a song is even a retelling of a story from the Bible, such as "Before the Destiny," which recounts Moses receiving the Ten Commandments and the Israelites crafting the golden bull in his absence. Other songs choose to cover topics relevant to believers. Whatever the angle, though, vocalist and lyricist Drew Brammell shows no signs of pulling punches. "Skeletons" is a prime example: "Swallow all your pride, you just cannot commit / just like a dog returns to its vomit / tried your best to remove all these stains / you've removed the speck yet the log remains / judge not lest ye be judged / your prayer closet is full of skeletons." Behold the Dawn is a project that really has a lot going for it - bold and unashamed lyricism and definite musical talent are present, the heights of which are only really held back by the lower-budget production. According to their social media, a third album will be coming out at some point, and I'll be interested to hear it when it does.
- Review date: 8/18/21, written by Scott Fryberger of Jesusfreakhideout.com