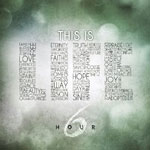 Hour 6
This Is Life

Hour6 is a Southern Californian pop alternative band that has just released its second full-length album to the Christian music community. Recorded in various parts of Southern California (including this reviewer's hometown of Ontario), This Is Life is a thirteen-track endeavor that's dripping with praises of Jesus set to skillful and well-orchestrated pop, rock, and alternative music that rivals most modern radio music. And it's the music itself that is the album's strongest part, particularly when they're engaging in the rockier sound. One of the highlights of This Is Life is the driving rock sound of "Fists on Fire," which features an energy that is very indicative of what Hour6 is capable of. Sadly, this song features one in only a few moments in which they really sound this way (though "A Lesser Man" does come close). With that being said, there's some impressive guitar work to be found in other tracks like "This Is Life" and "Back From The Dead." The rest of the album is lighter and brings a variation of southern rock and early alternative. Good comparisons include Collective Soul and DecembeRadio, with influence from bands like The City Harmonic or Hillsong Live - there's even some of that infamous delay pedal action in "Where It Starts," as well as some chantable "whoa-oh-oh"s in "I Am Here" (and both in "Back From The Dead"). As I mentioned, Hour6's music is what's most memorable about This Is Life, with the lyrics struggling to find themselves. "A Lesser Man" contains a good example, which is found in its chorus: "I'm gonna live like there's no tomorrow, forget about what I can't control, aim for something so much more, I'm gonna live like there's no yesterday, break off what I can't contain, bury the past and walk away, surrender what I'm holding on to, my life is Yours, I'll give it all to You." "We Are The Ones" has another example, as they sing "You search the world for a perfect fit, one more committee that can't commit, don't fall asleep on this or you'll be left out, this is what the history books will be about." I also find the lyrics "Win or lose we're gonna fight today, we don't believe in timing" to be a little hard to decipher. Hour6 is a band with potential, as noted especially in the musicianship, and on that front itself, they prove to be a better band than a lot of Christian radio offerings. With a little dedication to stronger lyricism (without compromising where they stand), they could truly be a band to get excited about. - Review date: 6/22/13, written by Scott Fryberger of Jesusfreakhideout.com