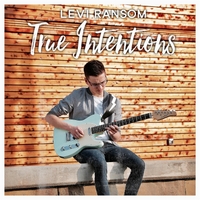 
Already boasting several albums in his discography, Levi Ransom is a young singer/songwriter from Atlanta, Georgia, who has just released a new full-length project of original songs, called True Intentions. Ransom spends a lot of time singing with high-pitched vocals, in the realm of Brooks Paschal from Sullivan, but he shows his lower register pretty frequently as well to balance it out. The lower vocals are key here, as a large portion of the album dabbles in country music, both acoustic- and electric-guitar based. Ransom's ballads are surely the stronger offerings here, as songs like "Outsiders," "Tell Me That You Love Me" and "How Could You Love" are some of the standout tracks. Overall, True Intentions is very promising for Levi Ransom, displaying solid musicianship and a keen ear for melodious songwriting. There are a few missteps, however (the out-of-place dance track "Help Me Get There" and the obnoxious chorus of "It Is What It Is"), as well as things missing that he could benefit from in future releases. A lot of the songs sound pretty echoey and could use some crisper production, and more prominent drums on some of the tracks could make for a fuller listening experience. The upbeat "Get Back Up," for example, didn't quite reach its full potential due to missing drums. Even if Ransom only has a drum machine at his disposal, it could work wonders for the louder or more exciting songs. Otherwise, there's a lot to like about Levi Ransom's music, and I hope to hear more from him.
- Review date: 7/3/17, written by Scott Fryberger of Jesusfreakhideout.com