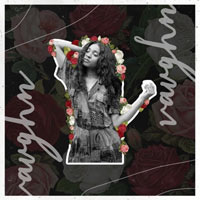 
With a number of performances under her belt, both live and as a guest vocalist on albums, Vaughn is finally branching out and releasing her own album of original songs. The self-titled EP contains five songs that give the listener a glimpse into who Vaughn is, as well as some of the other artists she's inspired by. Among those artists are folks like Lauryn Hill and Kim Walker-Smith, both of whom you can pick up in these songs (more so the latter). Vaughn's music really walks the line between praise & worship and pop, mixing interesting melodies and some electronic pieces with some Sunday morning-ready lyrics and enough accessibility to be listenable by even non-pop fans. Most of the album is rather quiet; several of the songs have multiple layers of music, but they manage to stay pretty tame ("Fight" is a terrific example). This isn't necessarily bad, but it would've been great to hear the music turned up a little, as it's perhaps the strongest aspect of this EP. Additionally, Vaughn's vocals aren't bad, but her strengths seem buried under some poor vocal choices. A lot of modern pop and worship singers tend to not open their mouths enough when singing, which really prohibits the singer from fully pronouncing words correctly or singing strongly enough. This happens occasionally here, which is unfortunate, because the times when she lets loose sound great. All in all, Vaughn's self-titled debut shows off some great skill, but is also hindered by some weaker moments and some unfortunate decisions. But Vaughn is available now for you to check out wherever you get your music.
- Review date: 8/30/19, written by Scott Fryberger of Jesusfreakhideout.com