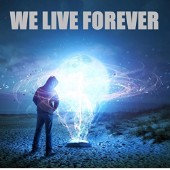 
We Live Forever is an acoustic and electronic based worship band, featuring Robert Steele, based in California. The group's self-titled debut released last month and, according to the band, looks to take the listener on a journey of Jesus's beauty, grace, and mercy. Acoustic guitar dominates the album, but piano, keyboard, and electronic instruments complement it throughout. Musically, the album has highlights, with the upbeat acoustic track "Faithful and True," the 70s rock flair of "Moon," and the more open, airy and light feel of "From Above." However, listeners looking for that more electronic influence will likely enjoy tracks like "Christ Above Me" and "Dreams" a little more -- with the slower paced "Dreams" being the stronger of the two. Lyrically, We Live Forever's debut focuses on God and has a strong sense of worship throughout. Lyrics like, "You are matchless without equal. You are holy and Your love is holding all the earth within Your hands. Great and mighty rich in mercy. I will trust in all Your goodness as I watch Your plans unfold in time" from "Matchless" point both to the album's theme and also show the worship offered up. The lyrics aren't always the most poignant, but they never fail to lift up the name of Christ. The album takes its biggest hit from a production standpoint. The mixing and mastering is a bit off with some tracks sounding louder than others. For example, "Faithful and True" stands out much more prominently in the mix, while "Moon," which directly follows, sounds a little more subdued and quiet in overall volume. The other blemish that stands out is the timing on "Awe and Wonder." The acoustic rhythm that starts the song off is fantastic, but the electric guitar that is added in around the thirty-five-second mark seems to come in just a hair early with each single strum -- sounding more like it starts on four-and-a-half, rather than coming in on one. Overall, We Live Forever have released a nice worship album with several positives to take away. Listeners looking for a worship album that's a little more raw in nature, compared to today's over-produced works, may find a lot to like about We Live Forever. What's most important to keep in mind for this release is that Robert Steele and company are looking to lift up the name of Jesus. You can never be wrong when that is your sole focus.
- Review date: 10/9/17, written by Michael Weaver of Jesusfreakhideout.com

The self-titled debut album from We Live Forever has been a couple of years in the making, but has finally made its way into fans' hands. It's a ten-song worshipful movement that simply stands to bring glory to God through music. The music has an electronic element to it, but seldom overtakes the acoustic-based pop rock music at its core. In fact, the vast majority of the songs are slower ballads designed for a more intimate worship experience, with only a handful of upbeat tracks, such as "Christ Above Me." The songs feature a lot of moments of direct worship, but it isn't limited to that. "God With Us" remembers the promise God made to be with us when things are rough, and "Moon" takes influence from Job 38 to challenge the thinking of man, asking, "Where were you when our God threw the mountains in the sky and made the moon? Where were you when our God spoke the words and made a man just like you?" We Live Forever's founding member, Robert Steele, plays several of the instruments on the album, and is also the lead vocalist and songwriter. Steele opts for transparency and straightforwardness in his songwriting; it makes for extremely accessible music for anyone who wishes to learn the songs and perform them in their own church, but it leaves little room for artistic exploration for those who have grown weary of today's popular worship music sound. Additionally, some of the songs tend to be a little repetitive, and Steele's vocal performance may suggest he has limited experience. But if you're looking for new worship music to add to your collection or playlists, We Live Forever is available now for such a purpose. - Review date: 10/6/17, written by Scott Fryberger of Jesusfreakhideout.com 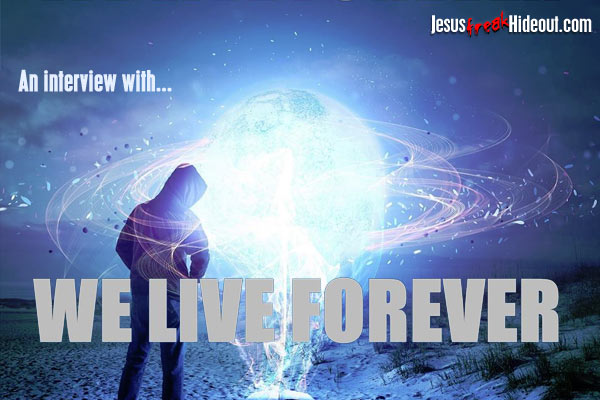 Robert Steele: I started playing worship music mainly as a keyboard player in 2003. In 2013, I started hosting a small group worship night at my home every week. We were regularly blessed with the spirit of God at the meeting. We started doing prophetic worship where someone would speak or sing a scripture or a Word from the Lord and we would sing it as a group, often in five-part harmony, all spontaneous. The song "Awe and Wonder" "appeared" in a worship night in this manner. In January 2015, I started getting chord progressions, melodies and lyrics. It started in the morning. I would feel compelled to get out of bed and turn on my iPhone voice recorder and play the song idea into the iPhone. The song "Moon" came to me this way in one shot: chords, melody and lyrics. I was not seeking to be a writer. I started making some time to "hear" from the Lord and sat at the piano while meditating. One evening, our group was feeling discouraged by tragic events in the world and another pastor in our meeting gave testimony to all the wonderful and beautiful things the Lord was doing around the world. The next day, while praying, the chords, melody, first verse and chorus of "Matchless" came to me in this way in its entirety, celebrating that God is moving even when we cannot see. The fact that this experience was so clearly not of my doing led me to take it seriously. I went to a studio and recorded "Matchless" in July 2015 as my first demo. From there, I took some lessons in Cubase and started learning how to record and produce the songs on my own. All through the recording process, I would ask God for confirmation that this was His will and a wise use of my time. He would answer with a new song or some creative inspiration that would move a mix forward. One example was "Faithful and True." I could not get a recording that captured the majesty of the text in "Revelation." After asking God for confirmation, I got inspired to change the key and the tempo, and the song fell into place.

Robert: I spent more than a year looking for the right image. I found it uncredited on deviantart.com and had to use the google image search to find out who the artist was to get the license. The artist's name is Kevin Carden, a Christian digital artist. To me, it visually represents the power of the Word of God to bring life and light out of darkness. Our theme is "music for eternal life."

Robert: I have a wide range of influences. In classic rock, it is Pink Floyd, Peter Gabriel and the Grateful Dead. In Jazz, I love Miles Davis and Keith Jarrett. I love classic gospel music like Mahalia Jackson, Rev. Cleophus Jordan, The Caravans and Tata Vega. In 2017, it's Coldplay, Tycho, Hammock, John Mayer and Miami Horror. In contemporary worship, I listen to Delirious?, Martin Smith, Jesus Culture, Hillsong, Bethel Music, All Sons and Daughters, but my favorite modern worship musician is Kim Walker-Smith. I am influenced by what seems to me to be her talent for opening heaven in a worship set.

Robert: Thank you. The vibe just sort of happened. I experimented with synth pop first. I heard that drum beat in a Chipotle restaurant and a friend helped me comp it in Cubase. I brought it to the band and we played it live several times and that sound just took shape from there. Lyrically, it was just a download from heaven. I woke up, turned on the iPhone recorder and played the song in its entirety on the first shot, minus the bridge. It does reflect that my heart is grieved to see how our culture seems to go out of its way to deny the reality of the fact that we owe our existence and every good thing to our Creator. Scripture says that the rocks will cry out if we don't cry out in worship to the Lord. I love science. I have an electrical engineering degree. Nearly every founder of every branch of modern science was a Christian and the ones that weren't, were Jews (and two or three deists) who believed in a Creator. There are literally hundreds of minor variables that if they were different by less than 1%, there would not be life on earth. Reality literally screams that there is a Creator. This song is a cry to the generation to see the truth and give humble adoration to our Creator and His son Jesus Christ.

Robert: On this album, it seems that "Awe and Wonder" is the one that really gets the audience moving and engaged the most. As a live player, that is really important to me. "Matchless" is the most personal one.

Robert: It was such a beautiful experience. I am so thankful to the organizers. I was born in California but went to high school and college in the DC area. I am always praying for our nation's government. I think it was wonderful that the focus was on worshiping Jesus. I really felt the presence of God there. I think we are at a point where only prayer and worship can solve some of our national challenges. It was wonderful to worship between the Washington monument and the Capitol. George Washington would kneel in prayer in his home morning and evening while reading the Bible and Thomas Jefferson regularly attended Christian church in the original Supreme Court chambers of Capitol building during his presidency. They were worshiping on that ground from its inception and it was so cool to carry on that tradition with tens of thousands of worshipers.

Robert: I am focused on recording a live video of the album this fall and will be scheduling shows in 2018.