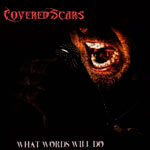 CoveredScars
What Words Will Do

For 13 years, hard rock group CoveredScars (formerly Covered In Scars) have been creating music that they hope will glorify the name of Jesus and help people find their way. Their latest album is called What Words Will Do. CoveredScars lists bands like Alice In Chains, Metallica and Static X (among a few others) as musical influences, and when you listen to What Words Will Do, you'll know it even without reading their bio. Json Eaves' vocals go back and forth between melodic and screaming. When he's singing, it sounds like an exaggerated take on Alice In Chains' Layne Staley (of course, this also means that Eaves sounds quite a bit like Creed's Scott Stapp). Eaves' screaming, on the other hand, sounds pretty good (when he's doing the high pitched screaming, that is). His screams remind me of Wayne Static from Static X, and they work great for the music when CoveredScars is doing heavier stuff. The problem with their music is that they can't seem to decide what they want to do with it. Songs like "Skin Crawl" keep it on the heavy side, with some guitar chugging, double bass, growling screams and some Coal Chamber influence, while the opening track, "What Words Will Do," is the aforementioned Alice In Chains style early grunge music. "Breaking Me Down" is a good example of the change up in music that's contained within just one song. In this song, harsh screams come about as frequently as the dry, droning rock vocals, and the music ranges from hard rock to Powerman 5000-style nu metal. While CoveredScars sounds pretty good, albeit dated, doing the nu metal and hardcore thing, it sounds a little strange to mix it with grungy alternative and rock music.

The band's message is noble and strong. They're very hopeful, with a strong emphasis on love and its power to break the chains of struggle and sin. "33 Years" proclaims the Gospel in saying, "Through the sweat and tears, without firing a weapon, He conquered! Through the blood and thorns, without firing a weapon, He conquered the world!" But unfortunately, even with such a good message, the lyrics can sometimes be cheesy, like "I packed my bags for a one-way ticket to Holy-wood." CoveredScars' latest album may appeal to either fans of aforementioned nu metal acts, like Powerman 5000, Static X or Rob Zombie, or it could appeal to fans of Stone Temple Pilots and Alice In Chains. Fans of the modern day hardcore/metal music won't be able to digest it, however. - Review date: 3/27/12, written by Scott Fryberger of Jesusfreakhideout.com 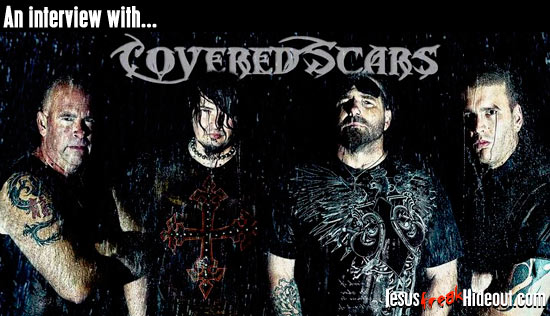 JSon: Yes, we have been a band since 1999 with a gap in there for a few years where I went and did vocals for two other bands here in Chattanooga, TN. Adam Bennett and I are still the original two members and founders of the "TEAM," as we call our ministry/band. We have only gone through two bass players and two drummers, though, and through GOD'S GRACE and the help of Craigslist, we found Jackie Cox "drummer" and Russ "MoJo" Wise "bass" and this four piece has been together now 2 years!

JSon: Well, it has to do with the love of music all in all as a whole in the beginning, but it wasn't until 6 years ago that I rededicated my life to GOD and turned everything around. And I went to practice the next day after Jan 31st, 2006 and I simply couldn't sing the lyrics that I used to sing, so I just stood there. It was at that time Adam had seen the light and excitement in me and asked if he could come to church with me and, soon after, he rededicated his life as well! He and his wife got baptized and now we use our talents and gifts as GOD originally planned for us to: to Glorify GOD and reach out to others with our testimonies to help change lives and let them know there is a God and if HE can change us, He can change them as well!!

JSon: We record with our good friend Adam Lawing at Cyber Mixing Studio online mixing and mastering studio designed to help independent record labels and unsigned bands achieve professional quality recordings (www.cybermixingstudio.com). CoveredScars records at his home studio. Adam Lawing is awesome to work with and has gone to school in Atlanta, GA for recording/mixing and mastering, so he knows what he is doing and jumps right in there to get us to try different tasks a few different ways to see which is a better fit to each song!

JSon: You're going to love this, but when CoveredScars hit the Christian music scene, we were a Comtemparary Christian Ministry/Band and we played local festivals and quite a bit of benefit shows, etc. But as far as big Christian Music Festivals, not yet. But we just got word that we are getting to play this July at the Cornerstone Festival on the Music Not Drugs Stage which we are fired up about as well as The "I AM SECOND" movement August 5th in Kennessaw, GA, and planning on playing a lot more festivals in the near future for sure! We have been concentrating on recording and getting our music out there since the first of 2012. We are booking now for this summer and fall! CoveredScars has played a lot of local venues in the past, like The Warehouse for one, where we opened for legendary STRYPER this past December, and got to hang and talk to those Christian men and also got invited to and played at Rocketown in Nashville, TN, which was an awesome time as well!

JSon: I would have to say Demon Hunter. For one, I believe their genre of music and ours goes hand in hand! I have a ton of respect for those guys and it seems like they have grown with each album they put out, spiritually, not to mention their music just keeps rising above and beyond limits and is off the chain! They have a great ministry and as Christian brothers; I would like to get to know them individually. With them owning Solid State Records it would also be killer to work with them!

JSon: What Words Will Do! It seems, with growing up in this generation, that our kids are being bullied parents are putting their family and friends down, husbands and wives are fighting-- the list goes on and on! I bet anyone of us can go out here in this world every day and see things going on and think "Good grief! What is going on?!" From depression to anxiey/panic attacks, teenage and middle-aged suicides, to homocide, every day it seems in every city it all really boils down to people not loving one another as they should! Every one of us in God's eyes are beautiful inside and out. Not one of us in God's eyes is better than the other. HE loves us all equally, and if we would all take that and learn from it, show our kids we love them and tell them we love them everyday, it would be amazing What Words Will Do!

JSon: How to walk in the spirit and not the flesh! How to be a better father and husband, to be patient, things happen for HIS reason and in HIS timing, and what waiting on GOD means, and why it's important to let GOD lead me rather than acting on my will and what I want. "I AM SECOND"!