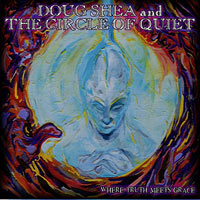 Doug Shea & the Circle of Quiet
Where Truth Meets Grace

Milwaukee native, and current Texas resident, Doug Shea, and his band (the Circle of Quiet), have recently released their third album, Where Truth Meets Grace. The sound is undoubtedly rock music, but the lyrics often come from more of a sense of personal worship. Shea, himself, describes the project as "edgy Christian rock with Jesus-centered lyrics." Much of the music has some classic rock tendencies, but also features some alt/rock and modern worship sensibilities (the band Live comes to mind in a few places). What's most striking is Doug's raspy voice against the musical backdrop. The vocals feel more akin to that of a post-grunge singer of the Scott Stapp variety. It certainly takes some adjusting to reconcile the apparent differing styles, and is a bit awkward at times, but once you settle in with Shea's voice, you can begin to enjoy the music on a much higher level. The background vocals throughout, provided by Monica Shea, are also a highlight. The production is a decent quality for an indie release, but there are times when the vocals overpower the music. One of the best examples of this in in "Wrapped In Your Heart." One of the top tracks is surely "The Healer." The lyrics center around the story of the woman with the issue of blood noted by three of the gospel writers. Shea talks about the power of her faith in that only touching Jesus' cloak would heal her. The idea of the song goes beyond this, though, and can easily be applied to one's personal life. Another of the top tracks present is the piano-led "Strength (In a Broken World)." Shea comments that the song was inspired by the sudden death of a friend, but is rooted in Jesus' promise as a comforter in the book of John. Where Truth Meets Grace is an interesting listen. The vocals make it seem like the music should be a little heavier, but Monica Shea's background vocals help to soften Doug's harsher crooning. Doug Shea & the Circle of Quiet will be for fans of worship music with a slight edge -- something along the lines of more recent Kutless records. The band won't be for everyone, but there are surely positives to be found throughout. - Review date: 7/15/16, written by Michael Weaver of Jesusfreakhideout.com

John 1:17 says "For the law was given by Moses, but grace and truth came by Jesus Christ;" such is the premise of the latest album from Doug Shea and the Circle of Quiet. Where Truth Meets Grace features a common blend of contemporary pop and rock, a la Jeremy Camp and Casting Crowns. Additionally, Shea's vocals are in the same arena as Camp's, with some Todd Agnew and a heavy dose of Scott Stapp thrown in. Though the church where Shea leads worship has no doubt become accustomed to the sound, his deep (and somewhat exaggerated) vocals occasionally have trouble fitting in with the songs; songs like "The Healer" and "Light In This Weary Land" suffer from vocals that are a bit too intense for the music. However, there are plenty of songs where the opposite is true, such as the southern-esque ballad "Wrapped In Your Heart" and "Strength (In A Broken World)." Vocals aside, Shea has penned some uplifting songs here, with messages of redemption of sin, as well as the refreshing of the Holy Spirit when we've become weak and we reach out to Him. The liner notes also feature Bible verses and inspirational quotes from a variety of sources, some of which are rather surprising to me: there are several quotes from the Jesus Culture camp (Jake Hamilton, Banning Liebscher, Kim-Walker Smith), but then there are also quotes from pastor Greg Boyd, Head and Fieldy (of Korn fame), and even Lenny Kravitz. The end goal is this: to share the love of Jesus Christ with everyone who hears the album. Doug Shea and the Circle of Quiet don't necessarily have a great piece of art to offer with Where Truth Meets Grace, but the lyrics reflect the truth of Christ and can certainly minister to someone's heart and soul regardless. - Review date: 6/26/16, written by Scott Fryberger of Jesusfreakhideout.com 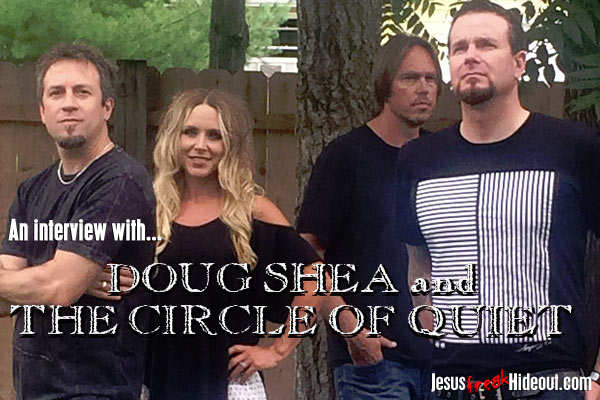 Doug: The Circle of Quiet was taken right from "The Message" paraphrase of the Bible. Psalm 94:13 says "Your Word, Providing a CIRCLE OF QUIET within the Clamor of Evil." I chose it because that is what God literally did for me during the process of writing these songs. During many situations that would most certainly fold anyone to the ground in despair, He gave me a peace that surpassed all understanding.

Doug: Artists that truly inspire me are ones that walk the walk. The ones that walk in the world but are clearly not of the world. I'm inspired by how a Christian artist presents themselves at a concert, during an interview and in their daily walk. I believe we need many different expressions of our love for Jesus in music, but our responsibility of sharing the Gospel and being Christ-like role models is far more important. That artist, in any genre, is what inspires me.

Doug: God has done the miraculous in my life. I was driving, feeling alone and desperately wanting my life to be over. I was in such agony - utter despair and sadness. Tears filled my eyes as I screamed at the top of my lungs to Jesus "Take it away! Take it away! You promised, and you can't break your word!" I must have screamed "take it away" dozens of times. Bible passages of all God's promises to His children flashed through my thoughts. As I was screaming, sobbing, completely broken and surrendering all I had, I felt Him. It was like a huge cloud of tangible love poured down upon me. It was the most beautiful, peaceful, exciting, electrifying and intense sensation coursing though my whole body. I felt all the filth being ripped out, like weeds from wet grass.

Anger, depression, addictions, mental illness and everything in between were gone. You may say I'm crazy, but here's a fact: I have never suffered from any of those things since. Not once! They're not in me anymore, they've been replaced by a loving God who I can feel everyday living inside me.

I'll never forget seeing the look on my wife's face when I walked through the door that day. Monica had spent years with an emotionally unstable man. She looked at me so elated, as if she saw the man she married for the first time. The first words out of her mouth were, "What happened to you?" From that day, everything about me changed, because I had an encounter with Holy Spirit.

Where Truth Meets Grace is about the six years from that point till now. I wanted my brother Greg to paint a painting of that moment in the spirit realm. God's love poring down on me and putting me in a circle of quiet.

Doug: I'm not certain why it gets overlooked because it has a fantastic life lesson on how to be healed. "The Healer" was written from the three small accounts in Matthew, Mark and Luke of the woman who touched Jesus' cloak. As I studied these stories, I started to see everyday principles from this brave faith-filled woman. I saw myself as the woman - broken and unclean. I too had tried many other avenues to get healing, but none worked and things even got worse. I saw the crowd in the story as the world that pressed around Jesus and blocked Him from me. The world was so loud and distracting, I couldn't even see Jesus.

The world told me I was too unclean and inferior to be close to Him. But faith is only as strong as what you have faith in. My faith was in God's promises and just like the woman who had faith in Jesus, we were both healed. I'm sure she got shoved back, ridiculed and even beaten. But her faith in Jesus gave her the strength and courage to fight through them. Jesus' own words were, "Your faith has healed you." When the world presses around Jesus, there are some days I have to fight through the crowd. But my faith and strength come from His promises of who He is in me. So I will push though the crowd daily, because I am His and He is the only healer.

Doug: I am perfectly content with whatever God wants with it. I just wrote down what He sent, so it's His. He can do whatever He wants with it. I know most people may not get it. I'm fully aware it doesn't sound like the Christian music that is popular these days. That's okay, because, to be perfectly transparent, I'm not quite certain why God spoke to me to write these songs? So I'm not certain what I should be doing at this point? I'm a bit broken about it and seeking His council daily. I wish I had a better answer for you.

Doug: It would be a blessing for me to play music and study scripture with Jeremy Camp. He is the artist that I connect the deepest with. He walks the walk as well, on stage and off. He was the first Christian artist that God tore the biggest walls of my heart down with. It would bring many tears to my eyes to meet him and say "thank you" for being such a big instrument of the Lord in my life.