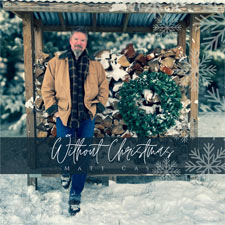 
Longtime musician and singer/songwriter Matt Case has spent much of his life allowing his music to be used in live ministry, but has only actively been recording music for a few years now. His third album comes in the form of a Christmas EP, just in time for the holidays. Without Christmas contains seven tracks, most of which are classic carols and are bookended by two versions of the title track, penned by Case himself (in addition to adding some of his own lyrics to "In the Bleak Midwinter"). "Without Christmas" features the story of a man asking his grandfather about the point of the holiday, as "It seems like such a waste to celebrate the birth of one baby boy that happened so long ago, so far away." At first the man's response (in the chorus) seems rather vague, but the rest of the song goes a little deeper into the point of Christ coming to earth: "And on that night in Bethlehem, as the shepherds watched the angels sing, "behold the great I Am!" / a star would show a holy light to declare the one who'd conquer death and give to man new life." The track is done in a modern, contemporary worship style, with piano and strings, and bears a passing resemblance to acts like Casting Crowns, MercyMe, and some Chris Tomlin. Case's take on the classics, like "O Holy Night" and "O Come O Come Emmanuel," are done similarly and with more modern language (instead of any Olde English), fitting right in and being more than ready for fans of those bands to dig right into. If you're an early Christmas music listener, you'll be able to check it out this week. But regardless of when you flip the Christmas music switch, make sure to give this one a chance if you like current worship artists.
- Review date: 11/9/21, written by Scott Fryberger of Jesusfreakhideout.com