Maybe you haven't heard the name Michael Hughes Watson much by itself, but if you've ever listened to Above The Golden State, you've heard his voice. Shortly after the release of his new project, Wait, Watson took part in an interview with JFH's own John Underdown to discuss how he got his start in music and learning to tune the world out and tune into the voice of God...
This interview took place in June 1, 2019.


Michael Hughes Watson: At 19, I was a part of a church start-up in Portland, Oregon with Phil Comer and his son John Mark Comer. The church exploded and planted many other churches around the northwest. From 2007-2010, I was signed as a solo artist to Sparrow records EMI/CMG and released a few records under the moniker Above The Golden State. The last 9 years, I've continued to pastor and create music with a number of churches stemming from the latter.

Michael: ATGS was more or less a solo career. However, I never wanted to be a solo artist, so I tried to involve band mates as much as possible into the mix. ATGS simply became a stylistic expression of what I call west coast rock. Eventually, it made more sense to go by my full name for clarity. I write and produce music in so many different styles that using the different monikers help identify the style of music. 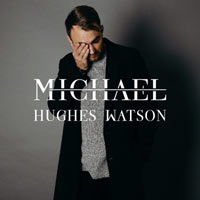 Michael: I've been in a routine of waking up and reading the scriptures for years now. This allowed God to speak to me and inspire many, many songs. However, these songs were born from a deeper desire to be more in tune with the Holy Spirit via listening prayer. Neither had much of a framework for me, until our church was influenced by a number of movements outside the US. Meaning, they don't really reside anywhere on a linear Pentecostal vs Baptist spectrum when it comes to our relationship with the Spirit of God.

Michael: The acoustic and instrumental versions are really fun for me. I typically like full production, but I also value the simplicity of just an acoustic and vocal, or no vocals at all! The ukulele version of "Words of Life" is actually how the song was written. So that was fun to branch out in the full production, but then come full circle back to where it was birthed.

Michael: For sure! Like always, technology is guilty, and what one author calls the "tyranny of the urgent." Both things are influencing us more and more around the world. Culture has totally bought into the convenience of speed and knowledge as a healthy means to live. But it's not healthy. We can't keep up with the pace. We were never designed to. And Jesus calls us to a slower pace. I wonder how long will it take for everyone to figure this out.

My guess, it will take some time and there will be strong resistance for sure, but the church has the advantage here, thanks to the Holy Spirit, the scriptures, spiritual disciplines and community. Right now, I'm reading a fun book called Digital Minimalism by Cal Newport. I don't believe you'll find it under the Christian category on Amazon, but it probably speaks better to solitude and sabbath than most sermons you'd hear on Sunday.

Michael: That's an odd question for me now. I remember when I first became a Jesus follower as a teenager and I would try to remember to think about Jesus or the bible at least once during the school day. And if I did, I was stoked!

Now it seems like my whole life (mind, desires and resources) are fully intertwined with Jesus. I'm constantly thinking about Jesus' way, creation and His kingdom here on earth. I suppose 20 years of spiritual discipline, studying the scriptures, asking the hard questions and having strong relationships with family and mentors is the root of all that.

Michael: I'm glad you brought that up. I actually can't promise this record will make it to a full-length. The upcoming songs are already written and even halfway recorded, but I still need to raise the money to finish them. I'm a full-on independent artist. No label. No marketing. It's all word of mouth/messaging friends on social media. And, I should add, cool sites like yours.

I started a Patreon account about 6 months ago and it's going really well. Patreon allows fans to help creators like me finish and promote projects. There's all sorts of unreleased music on my account right now that you can go download when you sign up. And I think a total of like, 50 songs available. It's been amazing, and it has given me hope. (**Editor's note: His Patreon link is here -- https://www.patreon.com/join/michaelhugheswatson)

Michael: Ha. I kicked butt at the DMV on my last visit, so I'm going to go with the first one. I suppose it's fitting, given my last name is Watson. (Ya know, like Sherlock and Watson.)

And thanks again for helping me share these songs and stories!